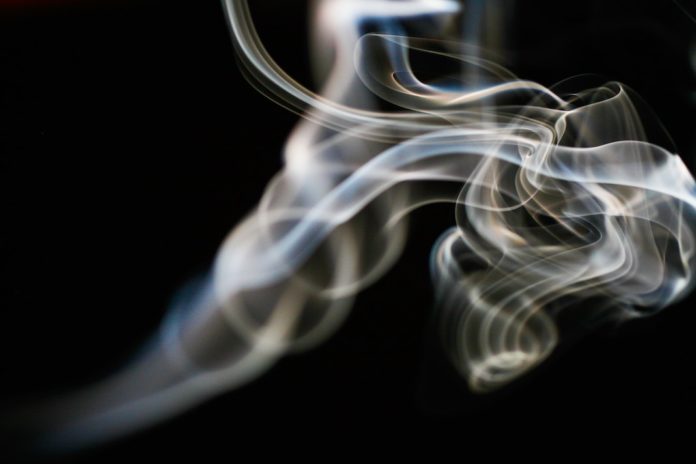 Tobacco smoking is a serious and preventable health hazard that can cause or exacerbate a number of diseases and shorten life expectancy, but the role of smoking as an etiologic factor in the development of skin disease is largely unknown. Although epidemiological evidence is sparse, findings suggest that tobacco smoking is a contributing factor in systemic lupus erythematosus, psoriasis, palmoplantar pustulosis, cutaneous squamous cell carcinoma, hidradenitis suppurativa, and genital warts. In contrast, smoking may confer some protective effects and mitigate other skin diseases, notably pemphigus vulgaris, pyoderma gangrenosum, aphthous ulcers, and Behçet’s disease. Various degenerative dermatologic conditions are also impacted by smoking, such as skin wrinkling and dysregulated wound healing, which can result in post-surgical complications and delayed or even arrested healing of chronic wounds. Most likely, alteration of inflammatory cell function and extracellular matrix turnover caused by smoking-induced oxidative stress are involved in the pathophysiologic mechanisms.

Pathophysiologic Effects of Smoking on the Skin

Tobacco smoke contains a complex mixture of gaseous and particulate compounds, several of which may have the potential to exert physiologic and pharmacologic impacts. Nicotine has for decades been regarded as a primary factor that engenders smoking-related disorders, but recent evidence clearly demonstrates that its temporary vasoactive effect on the skin and subcutaneous perfusion cannot satisfactorily explain the pathophysiologic mechanisms that impair wound healing and contribute to smoking-related disorders.1

Smoking produces systemic immunomodulatory effects through the release of reactive oxygen species from tobacco smoke, which is believed to cause a cascade of detrimental effects on normal inflammatory cell function by attenuating phagocytosis and bactericidal mechanisms, as well as by increasing the release of proteolytic enzymes.2,3 In addition, collagen synthesis and the deposition of mature collagen in the extracellular matrix are reduced through smoking.4 Such disruptive influences on these biologic mechanisms culminate in adverse affects on the cellular reparative pathways of the skin and its appendages, which can be observed in the healing of acute wounds in smokers. This cohort has a significantly higher risk of post-operative dehiscence and infection, and in patients who are heavy smokers, slowed or arrested healing of chronic wounds can also occur.5

Undoubtedly, degenerative skin disorders are the result of smoking-induced defects in reparative mechanisms and the progression of extracellular degradation of elastin, collagen, and other extracellular matrix molecules. More complex, and in fact unknown, is the role of smoking in the etiology of autoimmune and neoplastic skin diseases. It is increasingly apparent that the immunomodulatory effects and alteration of inflammatory cell function from smoking influences the clinical course of cutaneous diseases. Dermatologic research still needs to elucidate why smoking is an aggravating factor for some diseases, while appearing to mitigate the clinical course of others.

Model6 described the following as common features of a smoker’s face: lines or wrinkles on the face, typically radiating at right angles from the upper and lower lips or corners of the eyes, deep lines on the cheeks, or numerous shallow lines on the cheeks and lower jaw; a subtle gauntness of the facial features with prominence of the underlying bony contours; an atrophic, slightly pigmented grey appearance of the skin; and a plethoric, slightly orange, purple, and red complexion. These findings were shown to be independent of age, social class, exposure to sunlight, and recent change in weight. An additional feature that is sometimes present is large open and closed comedones with furrows and nodules in the periorbital area characteristic of Favre-Racouchot syndrome (smoker’s comedones).7 The nails of smokers may show a yellow discoloration, and in heavy smokers who suddenly cease smoking (e.g., due to an abrupt illness), a sharp demarcation line develops between the yellow nail plate and the newly developed proximal pink nail (referred to as Harlequin nail or quitter’s nail).8 Yellow discoloration of the hair and beard can also be seen in smokers, particularly in gray-haired individuals (e.g., smoker’s moustache). Furthermore, smoking has been linked to premature graying and loss of hair, although the supporting evidence remains circumstantial. Non-malignant changes in the oral mucosa of smokers are common and include gingival pigmentation (smoker’s melanosis), leukoplakia of the tongue (smoker’s tongue), and a gray-white keratinized palate with multiple red umbilicated papules that represent inflamed salivary glands (smoker’s palate/nicotine stomatitis).9

Smoking as an Etiological Factor in Skin Diseases

Smoking has been implicated as a causal or influencing factor for certain dermatologic disorders (Table 1). The obvious detrimental effects from smoking preclude experimental prospective interventions on human subjects, and therefore, the main body of evidence for these associations is derived from case-control studies. However, because of inherent biases connected with this type of research, as well as with cohort and observational studies, the conclusions that can be drawn from their findings are limited.

There is fairly good evidence to support a causal link between tobacco smoking and systemic lupus erythematosus (SLE), as it has been demonstrated that anti-malarial therapeutic agents for lupus are less effective in smokers.10 A metaanalysis of seven case-control studies and two cohort studies found a 1.5 times increased risk of SLE in current smokers, when compared with non-smokers. The finding remained significant after adjustment for age, sex, race, alcohol consumption, and socioeconomic status.11 However, the result may have been affected by publication bias due to an absence of studies reporting negative findings. Furthermore, former smoking was not found to be a risk factor for SLE. Exposure to smoking in early childhood or in utero was not associated with onset of SLE in a prospective cohort study.12 Discoid lupus erythematosus (DLE) has also been linked to smoking in several case-control studies, which have shown consistently higher smoking rates in DLE patients.13

Smoking has been observed to be a strikingly common current or former habit among patients with palmoplantar pustulosis (PPP) at the time of diagnosis. In fact, up to 95% of patients with PPP were smokers in a case series study.14 In addition, psoriasis appears to be closely linked to smoking. Tobacco smoking has not only been shown to exacerbate preexisting psoriasis, but usage has also been frequently found among individuals with new-onset disease. Furthermore, smoking has been shown to increase the risk of psoriasis in a dosedependent manner and to drive disease severity.15 Moreover, a large population-based study in Sweden of 9773 patients with a hospital discharge diagnosis of psoriasis reported an increased risk of tobacco-related cancers among psoriatic patients, but it is difficult to determine whether this observation reflects a higher frequency of smoking in this population or a shared adverse effect of smoking on psoriasis and cancer risk.16

The association between cutaneous squamous cell carcinoma (SCC) and smoking has been described in case-control and cohort studies. Notably, in the Nurses’ Health Study, smokers had a 50% increased risk of incident SCC compared with non-smokers.17 It has been speculated that this finding could be confounded by a higher exposure to UV-radiation among cigarette users. A large prospective study of Swedish men failed to replicate the positive association between SCC and smoking.18 In a Finnish study involving 290 same-sex twin pairs, where a single twin was diagnosed with basal cell carcinoma (BCC), significantly greater risk was observed to be related to smoking status in females but not in males.19 Moreover, smoking has been linked to BCC of the eyelid in women but not in men. A convincing link has not been established with cutaneous malignant melanoma (MM). In fact, several large case-control studies have found no association between tobacco smoking and MM. Although one study of stage-I melanoma patients found some evidence of thicker lesions among smokers, whereas two other studies demonstrated a lower risk of acral melanoma.19 The risk of oral cancers is increased in smokers and different researchers have consistently corroborated this finding.20

Observational studies have found a much higher prevalence of smoking (up to 90%) among patients with hidradenitis suppurativa, whereas smoking cessation did not appear to alter disease activity.21 Smokers also had a higher (dosedependent) prevalence and severity of acne compared with non-smokers in a large German population study; this effect was independent of age, sex, and socioeconomic status. On the contrary, two smaller case-control studies found a lower than expected prevalence of acne among smokers.22

A few other skin disorders have been infrequently associated with smoking. For example, hand eczema was more prevalent in smokers compared with non-smokers in a large crosssectional study of the general population.23 Moreover, genital warts and human papillomavirus infections were more common among individuals who smoke cigarettes.24 Crohn’s disease is more prevalent and severe in smokers, but smoking has not been examined in relation to cutaneous metastatic Crohn’s disease.22

In contrast, ulcerative colitis (UC) is less frequent in smokers, and as such, smoking may confer a beneficial effect on the course and severity of UC. Accordingly, treatment with topical or systemic nicotine has been hypothesized to be beneficial in pyoderma gangrenosum, which is often |associated with UC.22 Smoking has been shown to be protective for several other mucocutaneous disorders, probably due in part to nicotine’s anti-inflammatory properties. In particular, some studies have found that patients with pemphigus vulgaris were less likely to have a positive history of smoking when compared with the control group, and smoking may improve the clinical course of the disease.25 Also, recurrent herpes labialis and classical Kaposi’s sarcoma are less common in smokers.26,27 In addition, smoking may have beneficial effects on aphthous ulcers (e.g., prevent the development of new aphthae), and in Behçet’s disease, patients who cease smoking can experience a greater risk of recurrent ulcers.28

Tobacco smoking induces oxidative stress, which has immunomodulatory effects by changing inflammatory cell function and releasing proteolytic enzymes; the latter alters connective tissue turnover and degrades skin connective tissue. From the literature, it is reasonable to presume an etiological role for tobacco smoking in certain dermatologic conditions, particularly SLE, psoriasis, PPP, cutaneous SCC, hidradenitis suppurativa, and genital warts. In other skin disorders, smoking appears to mitigate the clinical course, notably in pemphigus vulgaris, pyoderma gangrenosum, aphthous ulcers, and Behçet’s disease. The pathophysiology, etiology, and clinical course of these skin diseases appear to be related to the immunomodulatory effects of smoking, but further studies are needed to identify and elucidate the specific mechanisms at work.

Sugar Sag: Glycation and the Role of Diet in Aging Skin

Hydrogen Peroxide Topical Solution, 40% (w/w) for the Treatment of Seborrheic Keratoses: A Review

The Role of Cosmeceuticals in Antiaging Therapy