Mandibular implantation is an outpatient procedure that can be used in combination with other minimally invasive cosmetic interventions. Specifically, silastic chin implants can help create a strong chin and smooth the jawline in carefully selected patients. A standard surgical excision tray plus a few additional simple instruments are required, and a variety of commercially available implants are available for placement via an intraoral or submental approach. Meticulous technique minimizes the small risk of nerve injury and numbness. Chin-jowl implants may be preceded by neck liposuction and immediately followed by a face-lift to achieve overall facial enhancement.

Today’s educated patients seek cosmetic procedures with less downtime, risk, and cost, yet they still expect a dramatic outcome typical of traditional techniques under general anesthesia. As experts in less aggressive skin surgery using local anesthesia, dermatologists must be innovative to produce rejuvenation results that appeal to this patient population. Often when smaller, less invasive techniques are combined, synergistic outcomes can be achieved that satisfy those patients looking for the level of improvement produced by traditional surgery. One example of procedural synergy is the combination of chin-jowl implants with neck liposuction and minimally invasive lifting procedures.

A weak chin, whether congenital or acquired through the normal age-associated resorption of the mandible, causes blunting of the cervicomental angle, a fleshy appearing neck, and an irregular mandibular border, and makes the nose appear proportionately larger.1-5 These facial features are negative physical attributes that suggest weakness, submissiveness, and lack of beauty. In contrast, a balanced and proportional chin is a positive physical attribute associated with strength, assertiveness, and youth.3 For example, our society does not generally elevate men with weak chins into positions of power; our political leaders, corporate leaders, and famous male actors typically have powerful chins and jawlines. The goal of chin augmentation is to increase the volume of the mandible to restore a natural and balanced relationship between lower third (mouth and chin), middle third (lower eyelids, cheeks, and nose), and upper third (forehead, eyebrow, and upper eyelids) of the face.

Chin-jowl implants are easily combined with local anesthesia face and neck liposuction, and lifting procedures. By providing volume replacement of the lower face, these subperiosteal implants create a more dramatic and permanent rejuvenation with minimal additional surgical time, risk, or downtime (Table 1). The analysis and correction of the recessed chin and irregular mandibular border is critical for a youthful and natural facial rejuvenation outcome. It requires an understanding of the anatomical changes of the mandible during the aging process, the ideal facial proportions for your patients, the esthetic value of a strong chin and smooth jawline, and proper selection of the numerous mandibular implants available for augmentation.

During the normal aging process, the mandible loses vertical height and anterior projection causing an alteration of the normal balance of the lower third with the upper two-thirds of the face.

Progressive bony atrophy of the mid-lateral mandible, located between the chin and jowl, and its overlying soft tissue results in the formation of the prejowl sulcus and an irregular mandibular border (Figure 1).1,3

This sulcus accentuates the aging jowl and eventually becomes the inferior aspect of the marionette line. Despite the loss of mandibular vertical height, the mental foramina maintain a relatively fixed distance of at least 8 mm from the inferior border of the mandible.3

This 8-10mm zone serves as a safe zone for the formation of subperiosteal pockets for extended chin implants that extend from the central chin to the mid-lateral mandible (Figure 2).1,3
The mental nerve exits the foramen in a superior direction surrounded by a fibrous sheath approximately 2.5cm from the midline.
This tough sheath protects the mental nerve from injury however, aggressive pocket formation or placement of larger implants may stretch the nerve resulting in transient numbness of the lower lip. The sheath also prevents upward migration of the lateral wings of the chin-jowl implant to prevent migration.3

A large percentage of patients seeking facial rejuvenation surgery are candidates for chin augmentation and/or correction of the prejowl sulcus. In a retrospective review of facial rejuvenation patients over a 12-month period, 24/121 (20%) of this author’s neck liposuction (n=55) and facelift (n=66) patients underwent simultaneous mandibular implant placement.6 Only 5% of these patients were aware that they were candidates for chin-jowl augmentation at the time of their consultation. During a facial rejuvenation consultation when the patient is unaware of his/her recessed chin and is a candidate for an implant, this author first discusses the primary procedures for which the patient initially requested the consultation appointment. When discussing the anticipated benefits of the neck or facial rejuvenation procedure, the limitations created by the patient’s weak chin or prominent prejowl grooves on the overall outcome is reviewed to set proper expectations. A discussion of the anatomy, the functional role of the chin in shaping the face and neck, and the importance of a smooth mandible for a youthful appearance is usually successful in orienting the patient to mandibular augmentation. Most patients are receptive to the suggestion of a mandibular implant because the long-term benefit of this procedure far outweighs the minimal risk. The author’s patients were polled 6 months post-procedure, and in the 95% of patients who were unaware of the mandibular implant option prior to surgery, all reported that the addition of the chin implant was a “very important” (18/19) or “somewhat important” (1/19) procedure to achieve their desired facial rejuvenation outcome.

Mandibular implants are ideally indicated for patients with age-related resorption of the chin, microgenia (small chin resulting from underdevelopment of the mandibular symphysis), micrognathia (small chin resulting from underdevelopment of components of the jaw), and prominent prejowl grooves when normal or near normal dental occlusion is present. A hypoplastic chin (microgenia) is the most common indication for chin augmentation. A simple method to assess the ideal anterior projection of the chin involves dropping a vertical line from the lower lip vermillion border of the closed mouth. In men, anterior chin projection that falls behind this vertical line, and in women, chins that recede more than 2mm behind this line are candidates for chin augmentation when normal or near-normal dental occlusion exists.2 When there is more than 2cm of recession of the chin behind this vertical line or significant dental malocclusion, referral for orthognathic surgery is indicated prior to implant placement. In patients with malocclusion who undergo evaluation and ultimately refuse jaw advancement surgery, chin implants are an option however, custom implants or modifications of commercial implants are frequently necessary to achieve proper augmentation.

Chin augmentation with alloplastic implants has been practiced since the late 1950s and has increased in popularity as our understanding of the anatomy of the aging face and mandible has been followed by improvements in facial implant form and function.3,5
This author prefers extended chin-jowl implants over central chin implants. The central chin implant is easier to place, however it does not have a correct anatomical shape and is prone to displacement.1 As the patient with a central implant ages, the lack of mid-lateral mandible augmentation results in an accentuation of the prejowl sulcus and the irregular jawline. In contrast, the extended chin-jowl implants provide both central chin augmentation and correction of the prejowl sulcus, resulting in a more natural transition from the chin to the mid-lateral mandible.1-3

There are numerous commercially available silastic implants with different configurations and sizes (Table 1).1-3,5 Each of these implants provides an effective augmentation, so implant choice is dependent on physician preference after discussing the patient’s desired correction. To ensure correct sizing, each implant style has a sizer set that allows for intra-operative comparison of 3-4 different sizes prior to placement of the actual implant. Each of these implants can be customized intraoperatively with a scalpel or scissors for patients with asymmetry or for sizes and shapes not available commercially.

A standard skin surgical excision tray will contain all of the instruments necessary, except for a periosteal elevator and an implant sizer set. The periosteal elevator should be no wider than 6mm to optimize subperiosteal pocket formation without traumatizing the mental nerve. The Freer elevator, commonly used for nail elevation or periosteal elevation by dermatologists, is a readily available instrument with a narrow blade. Gentamicin sulfate injection 80mg/2ml solution is added to the saline solution and placed in a small bowl for the irrigation of the incision and soaking of the implant. The implant sizer is set prior to placement.

This procedure can be performed with local anesthesia alone via an intra-oral or submental approach. When combined with facelifts, these implants are placed following neck liposuction and platysma plication through the pre-existing submental incision. The facelift procedure immediately follows implant placement.

While in a seated position prior to surgery, the inferior border of the mandible, the prejowl sulcus, the midline of the chin, and the incision located anterior to the submental crease are marked with a marker. Intraoral mental nerve blocks are obtained with Lidocaine 1% with 1:1,000,000 epinephrine followed by direct infiltration along the footprint of the implant at the level of the periosteum. Neck liposuction and optional submentoplasty are performed first. The 1.5-2cm submentoplasty incision, just anterior to the submental crease, is retracted cephalad over the central chin and the incision is carried down through muscle and periosteum to bone. After elevating the periosteum 1.5cm superiorly off the mentum, the subperiosteal dissection is directed posterolaterally along the inferior border of the mandible in both directions. The free hand palpates the inferior border of the mandible to ensure that the lateral pocket does not extend below the inferior border of the mandible. The subperiosteal dissection is carried out approximately 5.5cm laterally in each direction. Once the pockets are formed, the different sizes of the sizer implants can be used to determine the degree of desired augmentation. 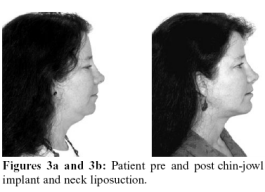 Prior to implant placement, the pockets are irrigated generously with the Gentamicin solution to minimize infection. The implant is placed by inserting one wing with a hemostat into the subperiosteal pocket and advancing the implant slowly to ensure its placement along the inferior border of the mandible. The implant is folded over on itself to allow insertion of the other arm into the contralateral subperiosteal pocket. Once inserted with its lateral arms flush with the mandible without curling of the ends, the implant is moved horizontally with a hemostat or forceps until the blue line present at the implant midline is aligned with the patient’s midline.

Two 4.0 Vicryl® (Ethicon) sutures are placed to fix the inferior border of the central portion of the implant to the inferior edge of the chin periosteum to prevent cephalad movement of the implant immediately post-operatively. If possible, the periosteal flap created above the mentum is dissected free from the overlying muscle and reapproximated to the inferior periosteal remnant. Meticulous closure of the muscular layer and skin is performed with 4.0 Vicryl® interrupted, buried sutures and 5.0 running, interrupted, or subcuticular nylon sutures.

Complications are temporary and are minimized by careful preoperative counseling, ensuring a sterile environment, careful execution of the periosteal pocket formation, and correct sizing of the implant (Box 2). Once the dermatologic surgeon is experienced, this procedure is accomplished in less than 30 minutes with minimal complications.

A follow-up survey undertaken 6 months postoperatively by this author revealed that 60% of patients experienced post-operative complaints including swelling (9/12), tenderness (9/12), and numbness (1/12). All problems resolved within 3 months.6 No episodes of extrusion, displacement, nerve injury, or infection occurred. Permanent nerve injury is rare due to the anatomical considerations. Patient dissatisfaction can be corrected by implant removal with the option of placing a different size.

The Forehead Flap for Nasal Reconstruction: How We Do It