The origins of nanotechnology may date back to the 1950’s when physicist Richard Feynman proposed developing machines that made smaller copies of themselves.1-3 Feynman surmised that multiple iterations of this process could create machines in the subcellular size range from bench-sized starting materials. If the bench-sized machine could perform useful work, then its replica could as well. The tiny products could then be integrated into assembly lines that could generate microminiature replicas manufactured with atomic precision. These miniature factories could then be fed molecular substrates and turn out molecular products at a prodigious rate, a sort of Detroit scaled to the size of a mitochondrion. In the 1970’s, K. Eric Drexler made computer models for some of these processes and designed simple molecular nanomachines consisting of pulleys, gears, and screws; these could self-assemble, based on their charge or polarity into useful devices.

Drexler further realized that matter has unique properties on the nanoscale. For example, as matter becomes smaller, it becomes subject to scaling laws. Scaling laws govern the basic laws of motion and Newtonian physics. When lever arms are smaller, they spin faster, and when incorporated into motors, they can generate more power.

Most nanotechnology bypasses quantum mechanical considerations in atomic behavior and treats atoms and molecules like smooth spheres. On the nanoscale, liquids behave like buckets of billiard balls, gas behaves like a hailstorm, and photons pelt like ping pong balls. Matter on the nanoscale also displays properties that are different from the parent compound on the macroscale. For example, table salt, sodium chloride, is brittle and an insulator in bulk form. On the nanoscale, salt stretches like taffy and conducts electricity. Sunscreens made from titanium microparticles, while effectively blocking UVA and UVB light, require a greasy vehicle for dissolution and leave a chalky residue when applied on the skin (Figure 1). Nanosized titanium particles dissolve more easily in water-based vehicles and leave no residue on the skin.4-6 They enhance their physical blocking capabilities by coating the skin more evenly.

Figure 1. As nanoparticles shrink in size, they interact with light differently. If they are smaller than the wavelength of visible light, they may become transparent. Smaller nanoparticles also coat the skin more tightly and evenly than their counterparts. Microparticle (left); nanoparticle (right) 1/1000 size of microparticle (not to scale).

Since Feynman’s and Drexler’s time, nanotechnology has made great strides.7 Consumer products such as sunscreens, shampoos, and cosmeceuticals have been developed. Diagnostic devices and tools are in the early stages of development and treatments for a variety of skin diseases are being explored in the laboratory. It is anticipated that nanotechnology will be the fastest growing area for the maintenance of skin health, as well as for the diagnosis and management of cutaneous disease.

There is a great deal of excitement about the potential for novel materials and devices using nanotechnology.8-10 In dermatology, these fall into three broad realms: consumer products, diagnostic products, and therapeutic products (summarized in Table 1). These will be discussed briefly here with examples of potential dermatologic applications for each field. 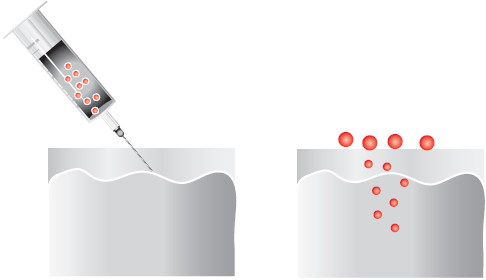 Figure 2. Some biologically active materials may be too large (botulinum toxin, hyaluronic acid) or polar (γ-aminobutyric acid) to penetrate the epidermis and may require injections for administration (left). Nanoencapsulated versions of these molecules may be stable and penetrate to the dermis (right).

Sunscreen has already been briefly discussed. A number of manufacturers have developed sunscreens using nanosized titanium, zinc, and iron to allow formulation in vanishing and cosmetically elegant vehicles. Fillers typically require injection to penetrate the skin (Figure 2). Hyaluronic acid in its bulk form is 50,000 nm or larger in size and is unable to penetrate skin.11,12 Nanosized particles of hyaluronic acid can penetrate the skin and are the basis of a topical delivery system in development. Retinoids suffer from instability and irritability. Nano-encapsulated retinoids are more stable and their release can be controlled and slowed, resulting in less irritation. Solid lipid nanoparticles and nanostructured lipid carriers can be synthesized with an active ingredient in the center of the particle to delay release. Slow release kinetics are important for perfumes, which can yield all-day fragrance.10 They are also useful for insect repellants, such as N,N-Diethyl-meta-toluamide (DEET), to prolong efficacy.

Fabrics incorporating superhydrophobic ‘nanowhiskers’ (nanosized hair-like projections on individual textile fibers) can repel stains, dirt, and microorganisms. Bulk silver is inert. Silver on the nanoscale is highly toxic to microorganisms, including resistant microorganisms such as Staphylococcus aureus.9,13 Fabrics impregnated with nanosilver are antimicrobial and may be beneficial to health care workers. Nanosilver is also being incorporated into dressings or bandages to minimize the potential for wound infection. Nanosilver in washing machines allows disinfection at lower temperatures and saves energy.

One of the great joys of dermatology is the primacy of examination in diagnosis. Most skin conditions reveal themselves to astute and informed observation. Nevertheless, dermatologists still use specialized tools and tests to assist in or confirm the diagnosis of skin disease. The tools of the nanotechnology era will bear little resemblance to our potassium hydroxide slide preparation and will be far less invasive than our punch biopsy.

Quantum dots are small semiconductors.8,14 They can be made to absorb desired wavelengths of light. Upon absorption, they emit brightly fluorescent color. Quantum dots can be coupled to tags such as antibodies. In animal models, tagged fluorescent quantum dots have proven useful for the visualization of tumors in the skin and for the harvesting of sentinel lymph nodes without the use of radioactivity.14

A nanopunch is a small, simple biopsy tool consisting of copper, nickel, silicon, and chromium layered in the shape of an origami claw. Differing coefficients of expansion of the layers allow temperature change to cause the claw to close and open, like a Venus flytrap. The nanopunch is paramagnetic and its migration can be controlled by a magnetic field. The nanopunch could be injected into the bloodstream and guided to challenging biopsy sites, such as the nail matrix, the fascia, and the liver. The claw could be activated by temperature and collected from a urine sample by a magnetic trap. Tissue could then be released for analysis.

Figure 3. Carbon nanotubes stretched across a gap conduct electricity. If they are coupled to receptors(antibodies shown here),the conductivity changes if the receptor is free or bound to ligand. This can be detected as a change in current in real time. (Not to scale, the entire ladder of nanotubes could easily fit into a mitochondrion).

One of the great areas for advance in dermatologic disease will be epicutaneous drug delivery. Some agents developed by nanotechnology will be recognizable, but some will defy and completely upend our current paradigms of dermatologic therapy. Drugs encapsulated in polymers or nanoparticles will be stabilized, and their release and activity will be targeted.

Volatile antimicrobial gases, such as nitric oxide, have been trapped in nanoparticulate chitosan,15 a carbohydrate polymer found in arthropod exoskeletons. When the polymer dissolves, nitric oxide is released. Biologically active forms of trapped nanoparticulate nitric oxide have shown utility in the treatment of skin infections and have proven highly effective at penetrating abscesses.

Botulinum toxin has been stabilized and encapsulated in a form that allows penetration of the skin and apparent effacement of rhytides in early clinical trials.16-18 Topical paralytic agents, such as ã-aminobutyric acid, are being used to transcutaneously relax muscles of facial expression to similar effect.

Encapsulated topical steroids are being developed, which accumulate in the epidermis, but do not penetrate the dermis, where collagenolysis associated with atrophy and telagiectases occurs. These types of agents will be useful for the management of spongiotic dermatoses and will carry a reduced risk of corticosteroid-mediated side-effects.
Bulk soybean oil is not toxic. Nanoemulsions of soybean oil are antimicrobial and are being incorporated into disinfectants. Nanoemulsions of other compounds that can penetrate the nail and the pilosebaceous unit are being used to treat onychomycosis and acne, respectively.

Polymeric nanoparticles encapsulating small inhibitor ribonucleic acids (siRNAs) can selectively inactivate gene expression. Nanoencapsulated siRNAs have been used for the management of a genodermatosis (pachyonychia congenital)19 and for the successful targeted delivery and inhibition of a test gene expressed in melanoma in human trials.20

Thermosensitive polymers encapsulate drug below a critical temperature and dissolve to release the drug above the critical temperature. These are being used for drug delivery at sites of inflammation (calor is one of the hallmarks of inflammation) and are also being developed to target release wherever external heat is applied. For example, methotrexate could be encapsulated in a thermosensitive polymer for psoriasis. It could be inactive in the polymer and released by endogenous (calor) or externally applied heat to treat individual or generalized psoriatic lesions. This type of delivery would be very useful and convenient for difficult to treat areas, such as the nails and scalp.

Topical nanoparticles can be engineered to elicit humoral and cell-mediated immunity.21,22 Microneedle patches have been shown to painlessly target delivery of vaccines to the epidermis and reticular dermis, where the bulk of Langerhans cells and dermal dendritic cells reside, inducing a potent immune response.22-24

Nanoparticulate drug delivery agents have been developed, their release can be controlled by magnetism, laser light of any frequency, and radio waves (Figure 4).

Figure 4. a. Materials encapsulated within nanoparticles can be designed to have prolonged release kinetics. This is useful for fragrances, insect repellents, and for once daily dosing. b. Nanoparticles can be coupled to receptors for targeting. For example, in animal models, the melanocyte stimulating hormone has been used to target gold nanoshells to melanoma. c. Nanoparticles can be coated with polymers that degrade in the presence of free radicals (O2-), radiofrequency (RF), temperature change (T), or magnetic fields (H), which allows for release to be both controlled and localized.

Nanotechnology capitalizes on the unique behavior of atoms and molecules on the nanometer scale. Nanomaterials depart from their parent compounds in their stability, reactivity, and ability to assemble into useful products. Nanomaterials are already being used in consumer products such as sunscreens, antimicrobial surfaces, and clothing. Nanotechnology is being utilized in cutaneous drug delivery to stabilize compounds, allow controlled release, and to enable targeted drug localization to maximize activity and minimize toxicity. The next generation of diagnostic tools using nanotechnology will be unlike any dermatology has ever seen.

For example, such advances may allow real time visualization of molecular markers of skin disease in vivo and in situ, rapid diagnosis of infections and malignancies using minute quantities of tissue, and minimally invasive skin biopsy in challenging locations. The theoretical concerns of the toxicity of nanomaterials will be discussed in part II of this series.25