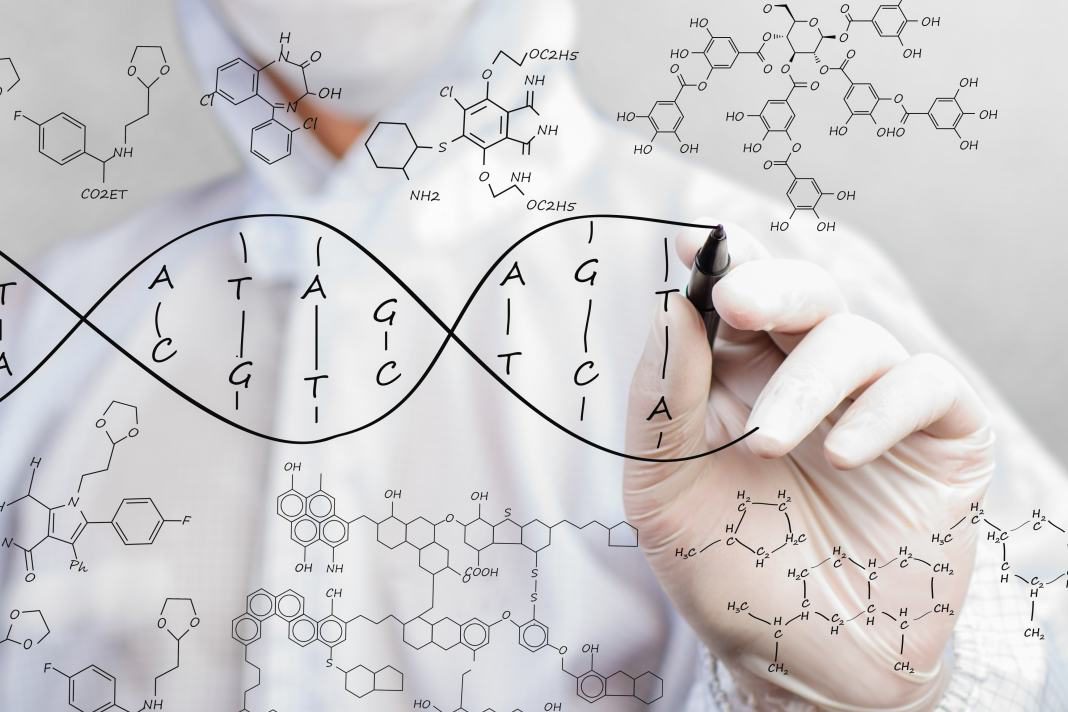 
1Department of Dermatology and Skin Science, University of British Columbia, Vancouver, BC, Canada

2Department of Ophthalmology and Visual Science, University of British Columbia, Vancouver, BC, Canada

The chin and jaw line are integral parts of an individual’s aesthetic profile, and the presence of submental fat detracts from this and can lead to displeasure with one’s facial appearance. While liposuction and cosmetic surgery are regarded as the gold standard in treating submental fat, surgical intervention is not appealing to all patients and has potential surgical complications including longer recovery, and contour irregularities. Despite ample advances in aesthetic medicine to enhance the appearance of the face, very little is available in non-invasive options to reduce submental fat that has been supported by robust evidence. ATX-101, a proprietary formulation of deoxycholic acid that is synthetically derived, has been extensively explored in a vigorous clinical development program that has established the safety and efficacy of the injectable. It has recently received approval by regulatory authorities in Canada (Belkyra™) and the US (Kybella®) for the treatment of submental fat.

Desirable features of the face are thought to follow the “golden
ratio” or Phi that is seen in natural formations.1,2 What is viewed as
an attractive face in contemporary culture does not significantly
differ from ancient times.3 Think of the bust of Egyptian queen
Nefertiti. The ideal face appears as an inverted triangle that
contains a wide mid-face that tapers toward the chin.4,5 A defined
chin denotes assertiveness, credibility, and leadership.6 A face that
has aesthetic balance is thought to feature a neck contour that
is pleasing to the eye.7 Individuals who have submental fullness
may be perceived as having an unattractive profile of the chin and
may experience reduced satisfaction with their appearance which
erodes their sense of well-being.8,9 The presence of submental fat
superficially and deep to the platysma muscle is regarded as a sign
of aging of the lower face,10,11 but there are individuals, both young
and old, whose morphology involves a round face which includes
deposits of submental fat. Still for others, a genetic predisposition
produces undesired submental fat that detracts from their profile
and remains even with weight loss and exercise.1,7

Surgery has been the mainstay to treat submental fullness,
colloquially referred to as the “double chin”.8 Complications from
surgery however make it somewhat unappealing to patients.12
Indeed, alternatives to surgery would be well-received by both
clinicians and patients.

It was first observed in cell cultures and porcine skin that
sodium deoxycholate, a bile salt that occurs in the body, acts as
the active ingredient in an injectable phosphatidylcholine and
sodium deoxycholate solution that treats the accumulation of
localized fat through adipocytolysis.13 Other investigators later
concluded that deoxycholic acid selectively targets fat tissue
while sparing other tissues like skin and muscle in the local
environment.14 The encouraging basic research has prompted
Kythera Biopharmaceuticals, Inc. to develop a synthetic form
of deoxycholic acid, with an aim to introduce a non-injectable
therapy designed to contour the chin-neck area through
decreasing submental fat.

The synthetic compound, known as ATX-101, is manufactured using a proprietary process, is indistinguishable from endogenous deoxycholic acid given it possesses an identical chemical structure, and does not contain any substances derived
from humans or animals. Chemical compounding that produces phosphatidylcholine/sodium deoxycholate formulations is not a process that guarantees a consistent formulation15 while the proprietary manufacturing process to prepare synthetic deoxycholic acid does achieve this.

In-depth study and evaluation of deoxycholic acid for the purposes of decreasing submental fat began in 2007 with preclinical investigations to first assess the safety and side effect profile of the compound, followed by research to elucidate the pharmacokinetic, pharmacodynamic, and optimal dosing of deoxycholic acid in a clinical setting. Safety data has assured that the subcutaneous injection of 100 mg deoxycholic acid, given via 0.2-ml injections spaced at 1-cm intervals, sees a temporary rise in deoxycholic acid plasma levels, but no increase beyond the normal range of variability for endogenous deoxycholic acid, with a return to baseline levels by 24 hours post dose.16,17 Chief among the safety observations is that injection of synthetic deoxycholic acid does not result in elevations in lipids and adipokine concentrations that are clinically significant.17

The clinical development program associated with ATX-101 has
enrolled more than 2,600 patients, of whom 1,600 patients have
been treated with the synthetic compound. Investigators have
witnessed fast absorption of the compound, as well as a decline
in overall fat in the treated area. Where needed in clinical studies,
anesthesia with topical lidocaine preparations together with ice
were provided to patients and local lidocaine injections were
performed in some cases.17

Histological data reinforce the proposed mechanism of action,
adipocytolysis (Figure 1), for deoxycholic acid.18 Injections of the
synthetic compound into abdominal fat were observed to result
in fat lobule atrophy amongst other outcomes as well as near
resolution of inflammation at 28 days, which determined the
spacing of treatments of just under one month.18 The treatment
schedule was assessed in phase III clinical trials. No histological
effects were seen in the dermis or epidermis.18 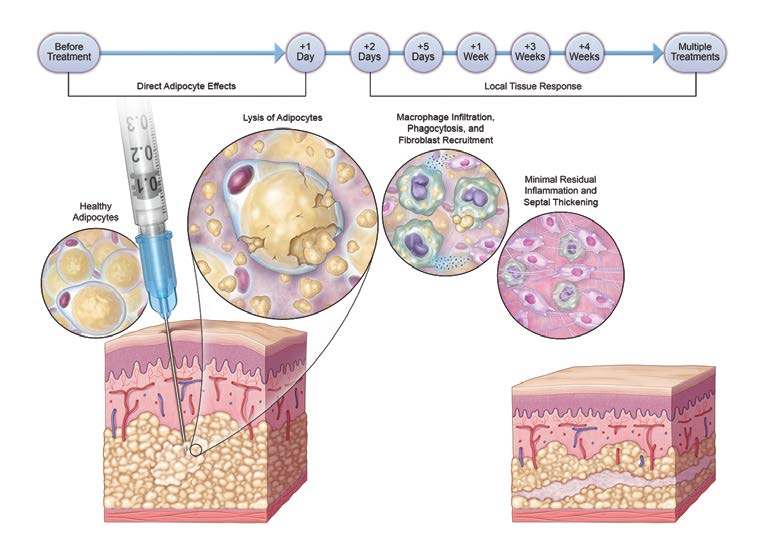 Of note, submental fat was not decreased any further when the
area-adjusted dose of deoxycholic acid was increased through
administration of a stronger concentration, larger injection volume, or shorter intervals between injections.19,20 Self-reported
scales, which denoted patient dissatisfaction with appearance, and
clinician-reported scales, which reflect investigator evaluations of
submental fat were employed to determine baseline appearance
as it relates to the chin in randomized, double-blind, placebocontrolled,
phase III clinical trials.21-25 In the two North American
trials, magnetic resonance imaging (MRI) was also employed to
assess a decrease in submental volume subsequent to deoxycholic
acid injection where MRI images were interpreted in a blinded
fashion.23,24 Post-treatment evaluations were conducted using
patient-reported instruments to determine approval with facial
appearance and appearance of the chin. Submental fat change
and its psychological effect were also evaluated, and the adverse
psychological impact of submental fat was diminished with
deoxycholic acid injection. Assessments performed at 12 weeks
after the last treatment showed that the synthetic compound
decreased submental fat based on patient, clinician, and objective
evaluations. In the North American phase III trials 68.2% of
ATX-101 (2 mg/cm2) subjects demonstrated a simultaneous
improvement of at least one grade from baseline on clinician and
patient reported rating scales vs. 20.5% in placebo (p<0.001). The
proportion of MRI responders was more than eight-fold greater
with the compound than placebo in the REFINE-1 trial.21-24

While there are predefined maximum treatments based on phase
III clinical data – four treatments based on European data and
six treatments based on North American data – fewer treatments
may be administered if efficacy is achieved earlier or if there
are safety concerns. After two treatments, 52.2% of subjects
achieved at least a one grade change from baseline in the clinician
submental fat ratings, and 71.5% after four treatments21-24, endorsing the concept of tailored treatment of deoxycholic acid
for each patient, taking into account factors such as individual
anatomy and the fact the quantity of submental fat decreases over
time with successive treatments. See Figures 2a and 2b for before
and after images.23,24 Durability is another favorable property
of deoxycholic acid therapy.24 Data bear out that the effect of
treatment is sustained for up to 4 years after the last injection.24 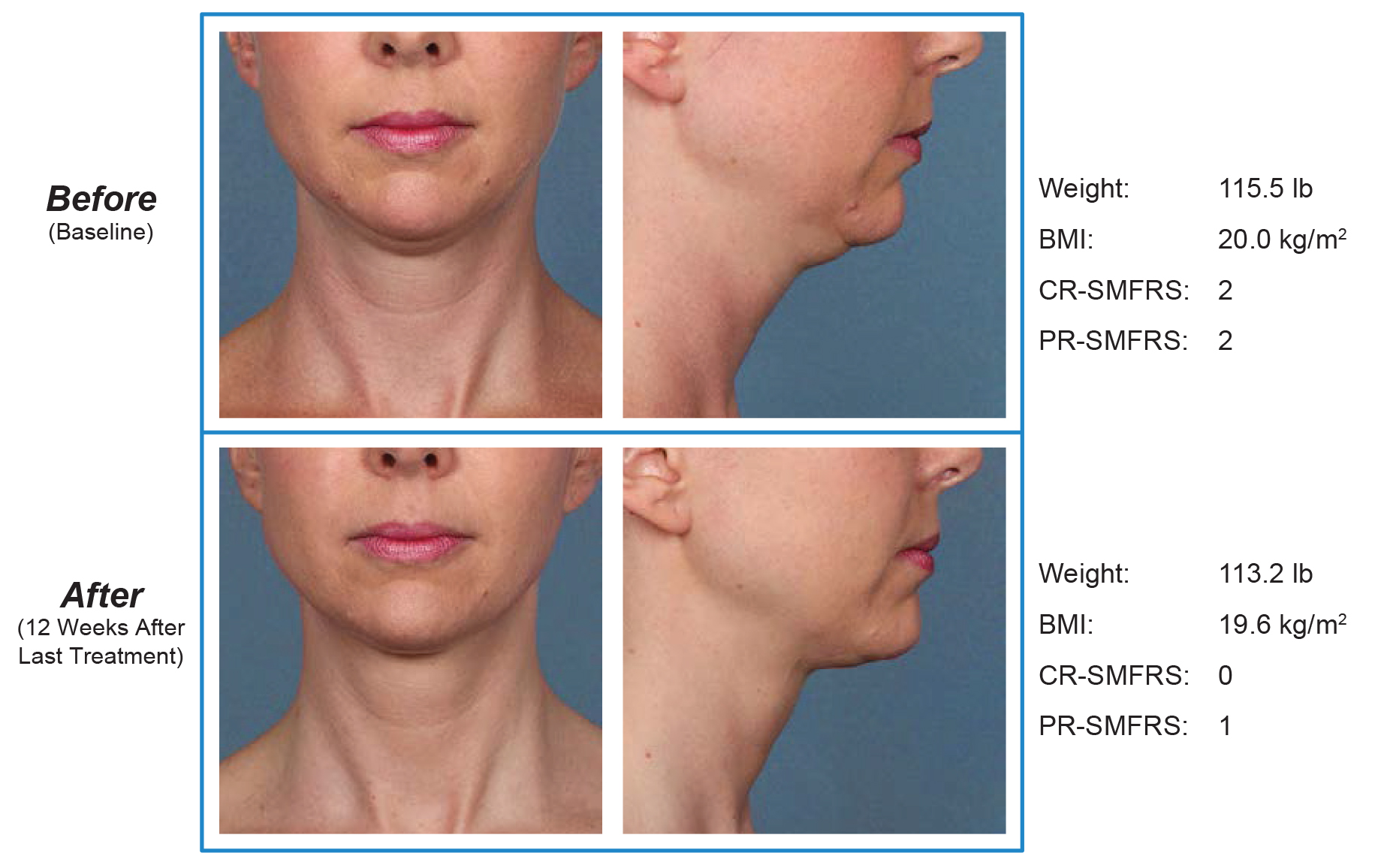 Figure 2a.
REFINE-2 (ATX-101-11-23) study – unretouched photos of clinical trial patient taken before and after treatment with ATX-101. 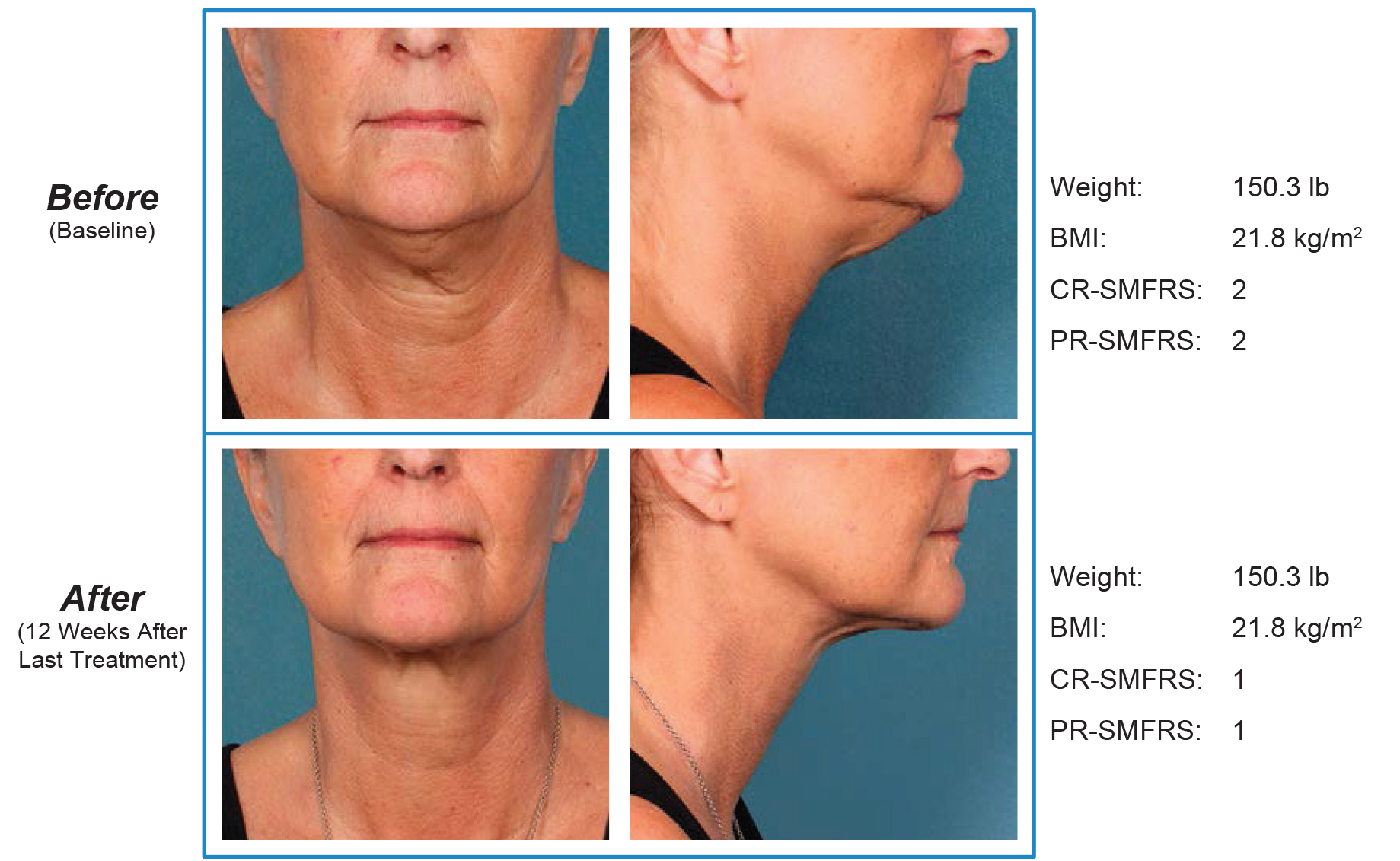 Figure 2b.
REFINE-1 (ATX-101-11-22) study – unretouched photos of clinical trial patient taken before and after treatment with ATX-101.

The majority of adverse events in the four phase III trials
associated with deoxycholic acid injections were mild or
moderate, and transient. Pain, swelling, bruising, numbness,
erythema, and induration were some of the most frequent
side effects and were linked to the treatment area, route of
administration, the mechanism of action of the compound, and
expected tissue response. With repeated treatments, the incidence
and severity of pain and swelling declined.23 Serious adverse
events were infrequent.23 One adverse event, albeit rare, that did
differ between placebo-treated patients and deoxycholic acidtreated
patients was marginal mandibular nerve (MMN) paresis,
but most instances of MMN paresis were mild or moderate in
severity, lasting a median duration of 47.5 days.23 No new signals
related to safety have been detected in extended follow up.

Phase III clinical trials demonstrated no exacerbation of skin
laxity, which is traditionally a worry when fat is extracted from
a targeted zone. In actual fact, skin laxity remained the same or
was improved in phase III clinical trials.21,24 It has been suggested
the absence of exacerbation of skin laxity could be attributed to
the phenomenon of neocollagenesis,18 which was observed in
histologic samples after treatment with deoxycholic acid. Happily
for patients, the data indicate procedures for skin tightening to
address skin laxity are not necessary after submental fat decrease
with deoxycholic acid therapy.

As a first-in-class injectable therapy, deoxycholic acid, was
recently approved by Health Canada and the US Food and Drug
Administration, as Belkyra™ and Kybella®, respectively, to treat
submental fullness. It is not approved for use in other facial
areas or sites on the body. As a minimally invasive treatment,
it can be performed in the office, results are visible in two to
four treatments, and recovery is relatively quick. Different from
facial injectables like fillers and neuromodulators, maintenance
treatments with deoxycholic acid are not required to sustain
the effect over time or to reduce skin laxity. Clinicians should
ensure sufficient submental fat is present to justify injection of
deoxycholic acid. They should also be cautious to avoid injuring
anatomic structures in the submental region when injecting the
synthetic compound.

The authors wish to acknowledge Louise Gagnon for her editorial
assistance in the preparation of this manuscript.