Acne is a common chronic inflammatory disease of the pilosebaceous unit. It can cause physical disfigurement and scarring and is also associated with depression, anxiety and social isolation.1 Although its prevalence is highest in adolescence, acne often persists into adulthood, especially in women. More than 50% of women in their 20s and 35% in their 30s experience acne.2 Given that long-term treatment is frequently required, topical therapy plays a pivotal role in its management. Topical retinoids are recommended as first line therapy for most acne patients by evidence-based guidelines in the US, Europe and Canada.3-5 Although utilization of retinoids has increased over time, a claims-based study of data obtained from a large US database indicated that of all patients seen by a dermatologist for acne, only 59% were prescribed either an oral or topical retinoid. Nondermatologist physicians prescribed a retinoid to 32% of acne patients.6 Retinoid use is limited in part due to their tendency to cause irritation of the skin.7 Novel retinoid formulations may improve tolerability and increase use.

Four topical retinoids have been approved by the United States Food and Drug Administration (FDA) for the treatment of acne: adapalene, tazarotene, tretinoin and trifarotene. Studies comparing the efficacy and tolerability of tretinoin, adapalene and tazarotene have shown mixed results.9-12 Whereas some of these studies have shown comparable efficacy and tolerability, others have shown greater efficacy but lower tolerability with tazarotene 0.1% cream, gel or foam. Studies comparing trifarotene to other topical retinoids have not yet been published.

Tazarotene 0.1% cream, gel and foam are FDA approved for the treatment of acne, initially in 1997. Although effective, cutaneous irritation has limited their clinical use.13 In an effort to improve tolerability and maintain efficacy, tazarotene has been reformulated at a lower concentration into a non-greasy lotion vehicle. Tazarotene 0.045% lotion was approved for the treatment of acne for patients 9 years and older by the FDA in 2019 and by Health Canada for those 10 years and older in 2021. Health Canada recommends use only on the face in those 10 to <12 due to increased systemic absorption in this age group. This new formulation utilizes polymeric emulsion technology, which encapsulates tazarotene within oil droplets along with moisturizing ingredients. These oil droplets are dispersed in an oil-in-water emulsion containing more hydrating ingredients that are trapped within a honeycomb matrix. This allows for a uniform distribution of tazarotene and moisturizing excipients on the skin, which should lead to more efficient drug delivery into the epidermis and reduced irritation.14

Two phase 3 multicenter, double-blind, randomized, vehicle-controlled trials studied the efficacy, safety and tolerability of tazarotene 0.045% lotion in the treatment of acne.16 A total of 1614 subjects with moderate to severe facial acne who were 9 years or older were enrolled. Subjects were randomized 1:1 to receive tazarotene 0.045% lotion or vehicle once daily for 12 weeks. The co-primary efficacy endpoints were inflammatory and noninflammatory lesion counts and Evaluator Global Severity Score (EGSS). Treatment success was defined as a minimum 2-grade improvement in EGSS and achievement of either clear or almost clear.

Treatment-related adverse effects were reported in 11.3% (88/779) of subjects receiving tazarotene lotion. The most common were application site pain (5.3%), dryness (3.6%), exfoliation (2.1%) and erythema (1.8%). Most adverse effects were mild, peaked at week 2 and returned to baseline by week 12. The authors commented that application site reactions were less common than those reported previously with tazarotene 0.1% gel, cream and foam, which may be due to the formulation of the lotion and its lower concentration of tazarotene. 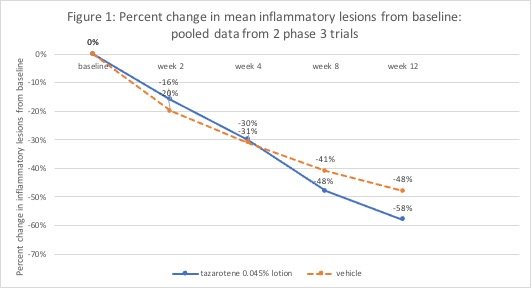 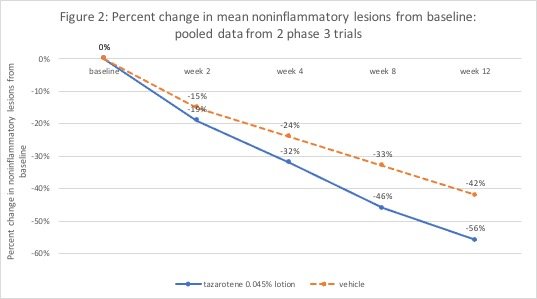 In two phase 1 dermal safety studies of tazarotene lotion conducted in healthy adults, no participants developed dermal sensitization.17 Likewise, no cases of allergic contact dermatitis were reported in tazarotene-treated subjects in the phase 2 and 3 trials. In the phase 1 cumulative irritation patch test study which compared tazarotene 0.045% lotion to vehicle lotion, saline solution, and sodium lauryl sulfate (SLS), tazarotene lotion was deemed to be “slightly irritating”. Although the mean irritation score for tazarotene lotion was statistically greater than that of the SLS positive control, this was felt to be due to the exaggerated dosing conditions employed. The authors commented that the cumulative irritancy score for tazarotene 0.045% lotion was less than half of those reported previously in other studies with tazarotene 0.1% gel, cream and foam.

Tazarotene is contraindicated in pregnancy. Although pharmacokinetic studies show low systemic exposure with use of topical tazarotene, exposure levels that could lead to teratogenicity in humans are unknown and there is currently very limited data regarding pregnancy outcomes after in utero exposure.18

As with all topical retinoids, topical tazarotene may increase sun sensitivity and sun protection is recommended with its use. Concomitant application of oxidizing agents such as benzoyl peroxide is not recommended to avoid potential degradation of the retinoid.19

When prescribing a topical retinoid, it is important to counsel patients on strategies to minimize irritation including:


RELATED ARTICLESMORE FROM THIS ISSUE