Lasers and intense pulsed light sources are frequently used for the treatment of pigmented lesions, and the appropriate selection of devices for different lesions is vital to achieving satisfactory clinical outcomes. In dark-skinned patients, the risk of post-inflammatory hyperpigmentation is of particular importance. In general, long-pulse laser and intense pulsed light sources can be effective with a low risk of post-inflammatory hyperpigmentation (PIH) when used for the treatment of lentigines. However, for dermal pigmentation and tattoo, Q-switched lasers are effective, with a lower risk of complications. In the removal of melanocytic nevi, a combined approach with a long-pulse pigmented laser and a Q-switched laser is particularly applicable.

The cutaneous application of lasers and intense pulsed light sources for the treatment of pigmented lesions can be divided into the following categories:

The use of lasers has been effective in the removal of some,  but not all, tattoos. Q-switched lasers have been found to be safe and effective in the treatment of tattoos. The response to laser treatment can vary greatly due to the wide range of tattoo ink. Previous in vitro quantitative chemical analysis of tattoo pigments found that the most common elements were aluminium, titanium, and carbon. Titanium overrepresentation was identified as the main reason for a poor response to laser treatment. Picosecond lasers were found to be more effective in achieving a greater degree of clearing. To improve the clinical outcome, more recent developments have included the external application of magnets to improve the removal of magnetite skin tattoos after Q-switched laser treatment, and the use of intradermal focusing of the Q-switched laser.1,2 In terms of complications, tattoos can darken after laser treatment due to the reduction of ferric oxide to ferrous oxide. This can be rectified with repeated Q-switched laser treatment and the use of a resurfacing laser. Less common complications include the development of allergic dermatitis or even anaphylactic shock after the laser surgery. Such reactions are thought to occur due to the release of allergic pigment into the extracellular space after laser exposure.

Lasers have been used for the treatment of lentigines, and although this is often effective for light-skinned patients with limited complications, for dark-skinned patients with a higher epidermal melanin content it can be associated with complications such as hyperpigmentation. Two years ago, our group performed an in vivo study of 34 patients and compared a Q-switched 532nm Neodymium:Yttrium-Aluminum-Garnet (QS 532nm Nd:YAG) laser to a long-pulse 532nm Nd:YAG laser.3 We found that the long pulse 532nm Nd:YAG laser (2msec pulse duration, 6.5-8J/cm2 fluence, 2mm spot size, with slate gray appearance as the clinical end-point) can result in a lower risk of PIH when used in the treatment of lentigines in Asians.3 We created controversy when we suggested that the photomechanical effect of QS lasers might not be desirable when used in such treatment. Intense pulsed light sources (IPL), which emit a broad band of visible light from a non-coherent filtered flashlamp, produce only photothermal effects. Recent studies that investigated the use of IPL to remove lentigines in Asians confirmed their effectiveness.4 Interestingly, no case of PIH was observed in two independent studies.

These observations confirm our hypothesis that the photomechanical effect of Q-switched laser for the treatment of lentigines in Asians is not desirable. The main concern regarding the use of the long-pulse laser for the treatment of cutaneous pigmented lesions is the potential of thermal diffusion from the epidermis to the dermis, which increases the risk of scar formation. To prevent such an occurrence, the pulse duration should be shorter than the thermal relaxation time of the epidermis basal layer, which was estimated to be in the range of 1.6-2.8ms if the epidermal basal layer thickness was 20mm.

It is now our routine approach to test patients with a long pulse 532nm Nd:YAG laser (2ms pulse duration, 6.5J/cm2 fluence, 2mm spot size), and if they respond well, we offer them full treatment. Those who do not wish to have down time, or those who develop post-inflammatory hyperpigmentation after the test, are offered IPL treatment, which requires several more treatment sessions to achieve the desired clinical outcome.

The use of lasers in the treatment of the café au lait patch has yielded variable results, and although some early studies indicated complete removal without recurrence, such findings have not always been repeated. Previous studies showed that 510nm pulsed dye lasers and copper vapor lasers can be used successfully, with no recurrence, at least one year after treatment. These reports were confirmed by others. Grossman, et al. used a QS Ruby laser and a frequency double Q-switched Nd:YAG laser, and found that the degree of clearance varied across lesions.5 Moreover, the categorization of the patches into the two histological sub-types that they identified did not help to predict the extent of the clinical response. We looked at the use of normal-mode ruby laser (NMRL) and compared it to QS Ruby laser in the clearing of café au lait patches in 33 patients. Our preliminary data indicated that there was a lower risk of recurrence when the NMRL was used (42.4% of recurrence, as compared to 81.8% recrrence in those who were treated with QS Ruby laser) 3 months after a single treatment. By affecting the follicular melanocytes, the long-pulse laser may reduce the recurrence rate. Further histological study is necessary to confirm this hypothesis.

Q-switched Alexandrite (QS Alex), QS Ruby, and QS 1064nm Nd:YAG have been used for the treatment of nevus of Ota with excellent results and minimal risk of complications. The clinical efficacy of the QS Ruby was confirmed when Watanabe and Takahashi6 studied 114 nevus of Ota patients and found that a good-to-excellent degree of lightening was achieved after three or more treatment sessions. The side-effects were few, with transient hyperpigmentation after the first treatment being the most common. Studies comparing the use of QS Alex and QS Nd:YAG lasers found that most patients better tolerated the former. However, QS Nd:YAG laser appeared to be more effective than QS Alex in the lightening of nevus of Ota after three or more laser treatment sessions. In terms of complications, hypopigmentation was common, especially among those treated with QS Ruby. The original pigmentation could also recur in patients after complete laser-induced clearing, which is an important issue, especially for pediatric patients. The risk of such recurrence is estimated to be between 0.6% and 1.2%. However, the use of QS Ruby laser for the treatment of nevus of Ota in children can achieve an excellent result in fewer sessions and at a lower complication rate than later treatment.7 Hence, the advantages and disadvantages of treating nevus of Ota early in childhood should be thoroughly discussed with the patient’s relatives.

Acquired bilateral nevus of Ota-like macules (ABNOM), or Hori’s macules, are a pigmentary disorder that is clinically characterized by speckled or confluent brownish-blue or slate gray pigmentation over the face, and histologically characterized by diffuse upper dermal melanocytosis. Unlike nevus of Ota, the pigmentation occurs in a symmetrical bilateral fashion, has a late onset in adulthood, and does not involve the mucosa.

One hundred forty patients with ABNOM were treated with a Q-switched Ruby laser (7-10J/cm2 fluence at a repetition rate of 1Hz, 2-4mm spot size). Complete clearance was obtained in 131 patients, and hyperpigmentation was observed in 7%. Hypopigmentation persisted in 2.1% of the patients, and there was no recurrence after 6 months to 4.3 years of follow up (mean was 2.5 years). QS Nd:YAG laser was also used to treat ABNOM, and the rate of PIH was estimated to be between 50% and 73%.8 Our group showed that QS Alex laser is effective in the treatment of ABNOM. Post-operative pigmentary changes were frequent, and the use of topical bleaching agents was necessary to achieve a satisfactory result. The risk of transient hypopigmentation was high, and it affected up to 50% of the patients.9 More recently, a combination approach with a scanned carbon dioxide laser followed by a Q-switched Ruby laser has been found to be effective.10 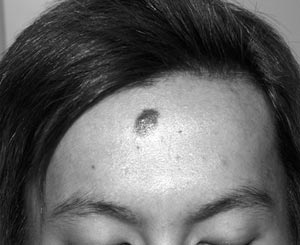 Figure 1a:  Before laser treatment 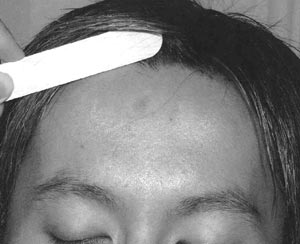 Melanocytic nevi are common, and often removed for cosmetic reasons. Various pigmented lasers have been used in their removal. A previous study using a QS Ruby laser found that an average clearance of 76% occurred after eight treatment sessions.10 However, recurrence can be a problem depending upon the depth of the nests of melanocytes. The use of a normal mode ruby laser (NMRL) for the treatment of melanocytic nevi is based upon the principle that with longer pulse durations, a greater degree of clearance is achieved when nests of cells are destroyed. A combined approach with a QS Ruby laser followed immediately, or 2 weeks later, with an NMRL has more recently been used with the intention of removing the superficial pigment first with the QS Ruby laser, thereby enhancing the penetration of the NMRL. A previous study found that although 52% of the nevi showed a visible reduction in pigment, no lesion had complete histological clearance. The short- and long-term histological findings of congenital nevi that have been treated with the NMRL indicated that subtle microscopic scars of up to 1mm in diameter are frequent. It has been proposed that such scars cover the underlying nevus cells, which leads to cosmetic improvement. Better cosmetic results were produced by first using an NMRL to remove the epidermis, immediately followed by multiple passes of a QS Ruby laser.11 This approach effectively removes the epidermis, and in doing so enables a greater degree of penetration by the QS Ruby, of which multiple passes further enhance the clinical efficacy. A similar approach using a long-pulse pigmented laser immediately followed by multiple passes of a Q-switched pigmented laser can obtain similar results (see Figure 1).

For epidermal pigmented lesions, long-pulse pigmented laser or IPL can be effective with a lower risk of post-inflammatory hyperpigmentation, especially when used on dark-skinned patients. Q-switched laser is necessary to remove dermal pigment and tattoo in order to avoid the risk of scarring. A combination approach can be used for the removal of melanocytic nevi.

Topical Agents Used in the Management of Hyperpigmentation

Hyperpigmentation and Its Topical Treatments