Chronic kidney disease (CKD)-associated pruritus is a significant clinical symptom affecting more than 50% of patients on hemodialysis. Restricted by the availability of effective therapeutic options, the management of CKD-associated pruritus remains a treatment challenge. Evaluating research in this area is difficult, as most studies are not comparable due to differing methodologies and study designs, limited number of patients, and the lack of standardized measures. The most frequently used therapy is UVB phototherapy, eliciting favorable responses in most patients. Newer approaches, such as treatment with the µ-opiod-receptor antagonist, naltrexone, have yielded conflicting results. The use of the k-opioid-receptor-agonist, nalfurafine, appears to be partially effective in relieving CKD-associated pruritus, as shown by a meta-analysis of 2 clinical trials. Promising results have been obtained by treatment with the anticonvulsant gabapentin. CKD-associated pruritus is thought to be mediated by a proinflammatory state, which explains why immunomodulating drugs (e.g., thalidomide, tacrolimus, and pentoxiphylline) are effective in some patients. Treatment of CKD-associated pruritus should be undertaken according to individual benefit-risk ratio assessments.

Chronic kidney disease (CKD)-associated pruritus (also known as uremic pruritus) is a common, sometimes extremely distressing, and intractable symptom experienced by patients with advanced or end-stage renal disease.1 CKD-associated pruritus affects approximately 50% of patients on regular hemodialysis;2 although there is a paucity of concurring data, the rate of occurrence appears to be similar in those receiving peritoneal dialysis.3 The prevalence of CKD-associated pruritus may be underestimated by the nephrologists in charge because of the large variation in different populations and the inherent undulating pattern of pruritus in dialysis.4 Many attempts have been made to relieve this bothersome symptom in affected patients with limited success.

Although the pathophysiology is multifactorial and not well understood, there is increasing evidence that immune system dysfunction and an elevated proinflammatory pattern are involved in CKD-associated pruritus.5 A combination of factors appear to play an important role in its etiology.6

Treatment options are limited in the management of CKD-associated pruritus. Therapeutic decision-making is further confounded when favorable findings from many reports (mostly uncontrolled trials or case series) are not validated by later studies. Herein, we present a focused review on the following therapies that have been tried with varying degrees of success:

A stepwise approach (Figure 1) may be employed in therapeutic decision-making. With respect to risk-benefit assessments, the selection of treatment modality should be guided foremost by the agent exhibiting a better side-effect profile. If feasible in desperate cases, high-urgency renal transplantation may be considered for suitable patients, which almost always reliably resolves the pruritus.7

Topical treatment with tacrolimus can lead to complete or partial resolution of eczema and pruritus in atopic dermatitis.8 In a preliminary study we reported on 3 patients on peritoneal dialysis with severe CKD-associated pruritus, 1 of them showing severe scratch lesions. Patients applied tacrolimus 0.03% ointment twice daily to the most affected areas for a period of 7 days and were asked to score the intensity of itch by a visual analogue scale (VAS) 1 week prior, during the application, and 1 week thereafter. Treatment with tacrolimus ointment led to an almost complete resolution of pruritus in 2 of the patients, while a third subject experienced a reduction of VAS score from 7 to 3 in relation to the intensity of itch.9 In a proof of concept study, Kuypers et al. reported treating 25 patients with tacrolimus ointment for a period of 6 weeks with great success.10 Using the VAS scale, pruritus was reduced by 42.9% at the end of the treatment phase. However, a randomized, double-blind, vehicle-controlled study in 22 patients did not show the efficacy of tacrolimus ointment over vehicle in relieving CKD-associated pruritus.11 Although, the effect of both the vehicle and the tacrolimus- containing ointment were significant (reducing pruritus to 80% of the initial values), the unexpected result could not be explained by the authors. No serious side-effects were observed. We believe that tacrolimus ointment is a safe and effective short-term treatment option for patients suffering from severe CKD-associated pruritus.

In a recent study by Chen et al., a cream containing high concentrations of gamma linolenic acid (GLA), an essential fatty acid derived from certain plant seed oils, was tested on 17 patients with CKD-associated pruritus.12 In this randomized, double-blind, placebo-controlled, crossover study patients were treated for 6 weeks, with a washout period of 2 weeks in between the 2 treatment phases. Paired analysis, using a VAS score ranging from 0 to 100, showed the intensity of pruritus was reduced from 75 to 30 following GLA treatment (p < 0.0001); whereas the median pruritus scores dropped from 72.5 to 67.5 after placebo treatment, which was a non-significant reduction. This investigation suggests that GLA can exert an improved antipruritic effect over vehicle and may serve as a useful adjunct in providing symptomatic relief.

A placebo-controlled, double-blind, crossover trial by Peer et al. showed that administration of oral naltrexone for 1 week led to an almost complete resolution of pruritus (as measured by VAS) in 15 patients with severe CKD-associated pruritus.13

Subsequently, we performed a placebo-controlled, double- blind, crossover study in 23 patients on either hemodialysis or peritoneal dialysis with persistent pruritus, who were previously unsuccessfully treated with other antipruritic therapies. Patients started with either a 4-week naltrexone regimen of 50mg per day or matched placebo. Sixteen of 23 patients completed the study. During the naltrexone phase, pruritus decreased by 29.2% according to VAS scoring and by 17.6% on a detailed questionnaire score. In comparison, during the placebo period, pruritus decreased by 16.9% according to VAS and by 22.3% as determined by the questionnaire score. The difference between naltrexone and the placebo treatments was not statistically significant.14

The findings of Peer et al.13 contrast the results of our study and cannot be explained by differences in patient compliance, naltrexone dose, or study design, as both studies were randomized, placebo-controlled, double-blind, crossover trials. However, the pathogenesis of uremic pruritus may be influenced by differences in the management of dialysis patients and regional disparities in lifestyle and dietary customs that are unique to certain parts of the world. Consequently, it may be possible that involvement of such additional pathogenetic factors have led to differences in both incidence of severe pruritus and naltrexone response.

As k-opioid receptors primarily mediate antagonistic effects on µ-opioid-receptors and k-agonistic drugs seem to suppress morphine-induced itch, it is likely that activating these k-receptors may lead to alleviation of pruritus.15

A meta-analysis of 2 randomized, double-blind, placebo- controlled studies involving 144 patients showed that treatment with nalfurafine (a potent k-receptor agonist) can reduce itch in hemodialysis patients. Although statistical significance was shown, clinical efficacy was only modest in the treatment of uremic pruritus.16

Butorphanol exhibits both k-agonistic and µ-antagonistic properties. It remains to be elucidated if this drug is effective in CKD-associated pruritus. Dwan et al. explored the use of intranasal butorphanol in 5 patients with intractable itch associated with various systemic or inflammatory skin diseases. Investigators reported rapid and marked improvements in itch.17 Study limitations included a small sample size and open-label design; consequently, further larger-scale, randomized, controlled trials are needed.

In conceptualizing uremia as an inflammatory state and that CKD-associated pruritus results from this condition,4 we investigated the use of pentoxyfilline in 7 hemodialysis patients with CKD-associated pruritus who were recalcitrant to treatment with gabapentin or UVB-irradiation. Pentoxyfilline, a weak TNF-a inhibitor, was administered at 600mg 3 times a week (at the end of each dialysis session) for 4 weeks. In those patients who tolerated the drug, almost complete resolution of pruritus was experienced for at least 4 weeks, even after cessation of therapy. However, 4 patients discontinued therapy due to treatment-related side-effects.18 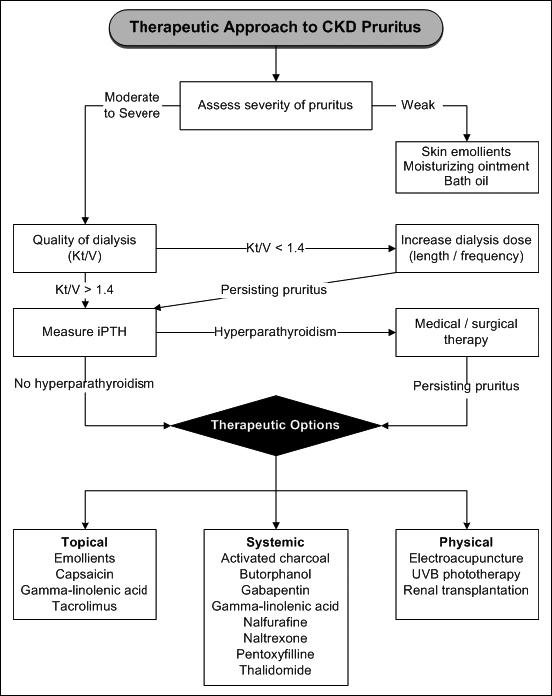 Thalidomide, used as an immunomodulatory agent to treat graft-versus-host reactions or myeloma, suppresses TNF-a production, and can be effective in the treatment of CKD- associated pruritus.19 A placebo-controlled, randomized double-blind, crossover study of thalidomide for the treatment of refractory uremic pruritus demonstrated improvements in itch scores in approximately 55% of patients in both phases of the trial. In addition, it was speculated that the antipruritic action of thalidomide may result from a central depressant effect.20

Gabapentin, an anticonvulsant and gamma-aminobutyric acid agonist, has been shown to exert a pain-modulating effect on patients with diabetic neuropathy. Gunal et al., in a randomized, placebo-controlled trial involving 25 patients on hemodialysis with CKD-associated pruritus, reported that 300mg of oral gabapentin administered 3 times weekly is safe and effective in reducing the mean pruritus score (reduction of pruritus intensity, as measured by VAS, from 8.4 before treatment to 1.2 at the end of the 4-week study period).21 In another double-blind, controlled, crossover study, Razeghi et al. treated 34 patients with 100mg gabapentin orally 3 times a week.22 After 4 weeks of treatment, intensity of pruritus was reduced from 100 to 6.44, as measured by a VAS scale ranging from 0 to 100. As gabapentin appears to be well tolerated, it has the potential to become an important tool in the management of CKD-associated pruritus.

In the late 1970s, Gilchrest et al. reported on the effectiveness of sunburn-spectrum (UVB) phototherapy on patients with CKD-associated pruritus. Although patients receiving long-wave UVA radiation treatment did not improve, 9 of 10 subjects treated with UVB phototherapy showed a marked reduction in pruritus.23 Subsequently, a series of studies explored the effectiveness of phototherapy in CKD- associated pruritus, especially radiation with broadband UVB. According to a meta-analysis by Tan et al., the most promising therapy for uremic itch is UVB radiation, whereas UVA does not appear to be effective.24

Newer data suggest that less side-effects are associated with narrowband than with broadband UVB treatments.25 The risks of skin malignancies following UVB irradiation and long-term topical immunosuppression are still matters of debate, especially in relation to immunocompromised patients suffering from advanced disease or in those scheduled to receive immunosuppressive treatment after renal transplantation.

The treatment of CKD-associated pruritus remains a frustrating endeavor and continues to present a significant therapeutic challenge for clinicians. Besides UVB phototherapy and gabapentin, immunomodulatory drugs and k-receptor agonists may be helpful in severe cases. A stepwise approach is suggested in choosing a therapeutic modality, and whenever possible, treatment should be initiated with the drug exhibiting the most favorable safety and efficacy profiles.