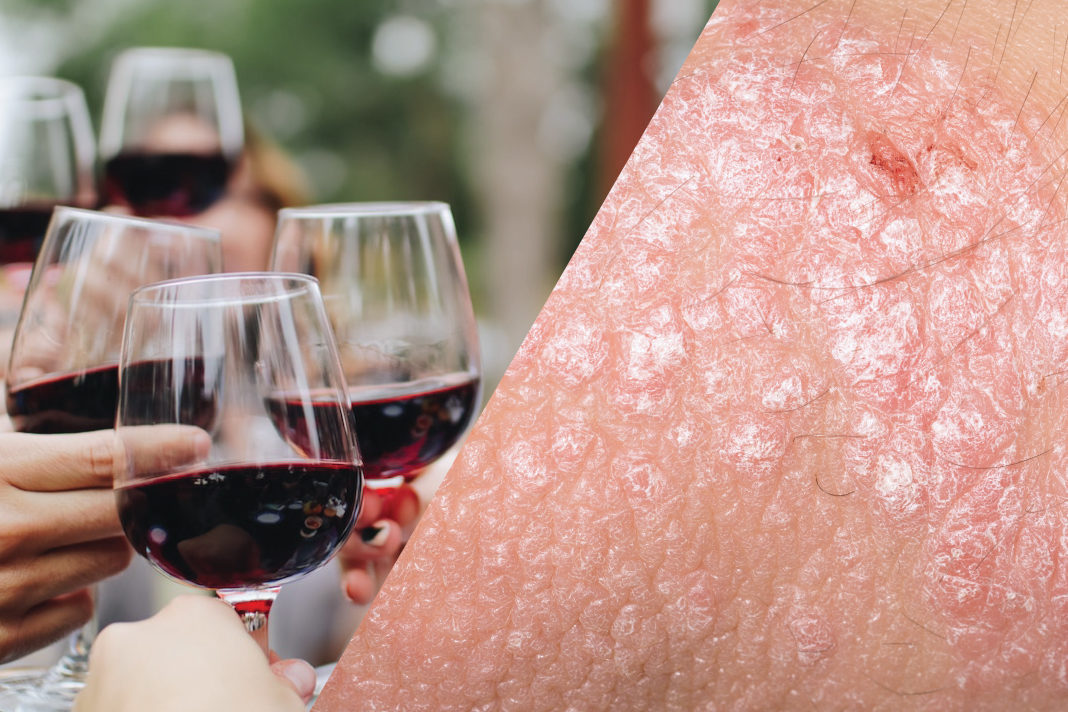 Alcohol is a serious cause of morbidity and mortality in our society and is implicated in multiple health conditions, including hepatic failure, neurological damage, hematological disorders, and nutritional deficiencies, to name a few. Although alcohol induced cutaneous abnormalities can also cause significant morbidity, they tend to be overshadowed by the other disease states associated with alcohol use. In addition to the cutaneous stigmata linked to chronic alcoholic liver disease, alcohol can directly cause or exacerbate several skin conditions. In particular, alcohol misuse is implicated in the development of psoriasis and discoid eczema, as well as confers increased susceptibility to skin and systemic infections. Alcohol misuse might also exacerbate rosacea, porphyria cutanea tarda, and post adolescent acne. Herein, we review the evidence concerning the influences of alcohol in skin conditions with a focus on psoriasis.

Alcohol induces a wide range of physiological derangements in the human body. Alcohol is cytotoxic to the liver, leading to alcoholic steatosis, hepatitis and, at later stages, cirrhosis1 with systemic sequelae. Alcohol is also toxic to the bone marrow, particularly the T cells, which in turn leads to attenuated immune function.2-4 The cardiovascular system may also be adversely affected by excess alcohol use. Specifically, high output cardiac failure, hypertension, and peripheral vasodilatation may be consequences of chronic and acute alcohol intake.2,5 Finally, alcohol misuse results in a myriad of nutritional deficiencies, including vitamin and trace element deficiencies2,5 secondary to interference with proper intestinal absorption and poor nutrition. All of these physiological conditions can contribute to the development of cutaneous manifestations associated with alcohol consumption.

The majority of cutaneous manifestations associated with excess alcohol use are indirectly mediated through the impairment of various organ systems.

Systemic and superficial skin infections, including bacterial and fungal infections, represent another health problem found to be more prevalent in alcoholics.2-4 The higher incidence of infections is likely attributable to multiple factors, including alcohol associated nutritional deficiencies in combination with immunodeficiency. Most notably, zinc and vitamin C deficiencies lead to poor wound healing, weakened mucosal barriers, and altered immune defenses with increased risk for infections.

Group A streptococci, Corynebacterium, and Staphylococcus aureus are common bacterial culprits,2 as are fungal infections with various tinea and Candida species.2,3

Malabsorption associated with alcoholism is another mode by which alcohol can produce cutaneous abnormalities. Angular stomatitis, glossitis, perifollicular hemorrhages, pellagra, petechia, and ecchymosis are just a few such cutaneous manifestations.

Porphyria Cutanea Tarda (PCT) is a metabolic disorder with cutaneous manifestations resulting from an aberration in hepatic heme biosynthesis. Whether acquired or inherited, PCT results from a deficiency in one of the hepatic enzymes involved in porphyrin metabolism, specifically uroporphyrinogen decarboxylase.2,3,6 The resultant upstream accumulation of photoreactive porphyrin precursors renders the skin extremely photosensitive.2 Alcohol is a potent inducer of the hepatic enzymes and the heme metabolic pathway, leading to an accumulation of photoreactive porphyrin compounds proximal to the enzymatic defect and, thus, precipitating PCT flare-ups.3,6 The cutaneous characteristics of an acute PCT attack include skin blistering and erosions on sun exposed areas2,3 that resolve leaving residual scarring and milia.

Alcohol impairs the vasomotor center of the brain, inducing peripheral vasodilatation.2,3 Hence, it has been suggested that this resultant cutaneous vasodilatation may exacerbate rosacea,2,3 contributing to the hallmark redness and flushing. Alcohol can also promote facial erythema in people without rosacea through a genetic deficiency involving an alcohol metabolism enzyme. This phenomenon is most commonly recognized in Asians, as studies have shown that 50% lack the ability to make aldehyde dehydrogenase, leading to an accumulation of acetaldehyde after alcohol consumption.2

The Role of Alcohol in the Pathogenesis of Psoriasis

Psoriasis is a common chronic inflammatory autoimmune condition, affecting approximately 2% of the population in North America.3 It is characterized by epidermal hyperproliferation3,7 and a multifactorial etiology. A complex interplay between genetics and extrinsic factors, including the environment, trauma, infection, and social behaviors appear to be influential on the origin and clinical course of the disease.3,8-11

Extensive evidence demonstrates a link between excessive alcohol consumption and psoriasis.3,4,11,12 The amount of alcohol consumed and the type of alcoholic beverage have both been shown to confer the most risk for development and/or exacerbation of plaque psoriasis.12 A recent prospective study following 82,869 women for 14 years showed that consumption of more then 2.3 alcoholic beverages per week was a significant risk factor for new onset psoriasis.12 Furthermore, the same study found that consuming non-light beer appears to be an independent risk factor for developing psoriasis in females.12 Similarly, in males, excess alcohol consumption (at levels higher then 100g/day) appears to be a risk factor for the development and increased activity of psoriasis.11,13 Moreover, the misuse of alcohol in patients with psoriasis has been shown to be associated with decreased response to treatment.2,13,14 Interestingly, the cutaneous distribution of psoriasis in heavy drinkers tends to be predominantly acral, involving the dorsum of the hands and digits, resembling that seen in immunocompromised patients, such as those with human immunodeficiency virus (HIV) infection.2,4 This distribution highlights the potential role of alcohol induced immunosuppression in the development of psoriasis.

The exact molecular mechanisms by which alcohol triggers or exacerbates psoriasis are yet to be fully elucidated. One theory is that alcohol misuse may induce immune dysfunction with resultant relative immunosuppression.2,3 Alcohol may also enhance the production of inflammatory cytokines and cell cycle activators, such as cyclin D1 and Keratinocyte Growth Factor, which could lead to epidermal hyperproliferation.2,7,15 Additionally, increased susceptibility to superficial infections commonly observed in alcoholics, such as those caused by Streptococcus and trauma, has also been postulated to have implications in the development of psoriasis.7

Although the environment and genetics may not be amenable to prevention or alteration, social behaviors such as alcohol consumption can be modified with appropriate counseling and pharmacological interventions, and therefore, appears to be a promising adjunct to the medical therapy of psoriasis.

An overwhelming amount of evidence suggests a significant link between alcohol and psoriasis – a multifactorial autoimmune disorder. Not only may alcohol contribute, in the presence of appropriate genetic makeup, to the development of psoriasis, it also results in more extensive and treatment resistant disease. Ascertaining carefully the presence of this risk factor in all patients suffering from psoriasis and providing appropriate counseling and education may help the clinician to minimize the risks of disease exacerbation and achieve better therapeutic outcomes.

Brodalumab: A Review of Safety

IL-12/IL-23 Inhibitors: The Advantages and Disadvantages of this Novel Approach for the Treatment of...