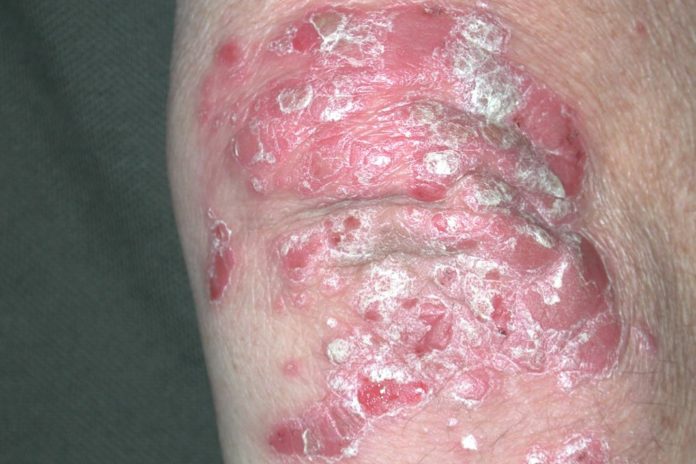 Although biologics are very efficacious as monotherapy in patients with psoriasis, combination treatment with traditional systemic and topical therapies may increase the speed of onset and enhance efficacy without significant additional toxicity. In contrast, in psoriatic arthritis, the addition of methotrexate to anti-tumour necrosis factor-alpha therapy does not enhance efficacy in either the skin or joints.

Psoriasis is a chronic inflammatory disorder that is associated with a number of comorbidities including arthritis, cardiovascular risk factors, and inflammatory bowel disease.1 Patients with moderate to severe disease usually require phototherapy, traditional systemic medications (e.g. methotrexate, acitretin, and cyclosporine), or biologic agents (e.g., adalimumab, alefacept, etanercept, infliximab, and ustekinumab) for adequate control.2 Alefacept binds to CD2 on CD45RO+ effector T lymphocytes, inhibiting their activation and inducing apoptosis of these T cells, while adalimumab, etanercept, and infliximab inhibit tumour necrosis alpha, a cytokine that is elevated in patients with psoriasis, and ustekinumab inhibits interleukins 12 and 23, which are also elevated in psoriasis.3 Although biologics are generally used as monotherapy, in Europe the concurrent use of traditional systemic agents can be found in up to 30% of cases.4 Addition of a biologic to traditional systemic therapy can enhance efficacy, or permit discontinuation or dose reduction of the traditional systemic agent without compromising disease control. On the other hand, addition of a systemic agent, phototherapy, or topical therapy to a biologic can enhance efficacy, including speed of onset, degree of clearing, and in some cases duration of remission or improve safety. Since acitretin can suppress the development of skin cancers, such as squamous cell carcinoma in high risk patients,5 addition to at-risk individuals receiving biologic treatment might enhance safety.

In rheumatoid arthritis (RA) and psoriatic arthritis patients, methotrexate is routinely used with tumour necrosis factor-alpha (TNF-alpha) inhibitors without additional toxicity.6,7 In contrast to the psoriasis and RA investigations, studies in patients with psoriatic arthritis have shown that concurrent methotrexate and anti-TNF agents (adalimumab,8 etanercept,9 infliximab10) does not enhance efficacy in either the skin or joints. Some efficacy and safety data in psoriasis are available for combination therapy with adalimumab, alefacept, etanercept, and infliximab, but not for ustekinumab.

Adalimumab in combination with methotrexate results in down regulation of more inflammatory markers in psoriatic plaques than monotherapy with either agent.12 In the ADEPT psoriatic arthritis trial, at week 48, PASI 50, 75, 90, and 100 response rates were greater in the with-methotrexate subgroups (n=29) compared to the adalimumab without methotrexate subgroup (n=40), but only the PASI 50 results were statistically significant (PASI 50 in 83% vs. 55 %, p<0.05).13

Alefacept has Health Canada approval for use in combination with mid- to high-potency topical agents, ultraviolet B (UVB) phototherapy, methotrexate, cyclosporine, and systemic retinoids.14 The Canadian AWARE study showed that alefacept allowed for a reduction in dosage or discontinuation of concomitant systemic agents or phototherapy.15

In an open-label study of 1-3 courses of alefacept (n=449), combination therapy with topical agents occurred in approximately one-third and combination treatment with phototherapy or traditional systemic agents was also used in approximately one-third of patients [UVB (n=24), methotrexate (n=63), cyclosporine (n=42), systemic retinoids (n=23), and prednisone (n=7)].16 When alefacept was added to existing treatment regimens, ≥30% achieved a response of mild or better. Concurrent therapy with methotrexate or cyclosporine resulted in lower response rates than with other agents. A physician global improvement (PGA) of at least two categories was achieved by 20-21% on methotrexate, 31-43% on cyclosporine, 50-64% on systemic retinoids, 43-62% on mid- to high-potency topical agents, and 55-77% on UVB. There was no increased risk of infection or malignancy when alefacept was used in combination with methotrexate or cyclosporine. The lower response rates with methotrexate combination therapy may be secondary to the study requirement for discontinuation of methotrexate within 4 weeks of initiation of alefacept and the fact that many patients experienced flares as soon as it was discontinued. Cyclosporine was also initially suspended within the first 4 weeks of alefacept therapy; however, due to flares, the protocol was amended so that cyclosporine could be discontinued within 6 weeks after the 12-week alefacept dosing period. Other therapies could be continued throughout the treatment courses.

In an open label study of 60 patients, greater efficacy and a more rapid onset of action were noted with a combination of alefacept and narrowband (nb) or broadband (bb) UVB compared with alefacept monotherapy.17 Four weeks after treatment was started, PASI 50 was achieved at the US site in 0% on monotherapy vs. 22% on bb UVB + alefacept, and at the French site 44% on monotherapy vs. 82-90% on nb UVB + alefacept. Similarly in a half-side comparison alefacept/nb UVB study (n=14), the side treated with nb UVB had accelerated and improved clearance.18

A case series of two patients who had previously been unresponsive to ultraviolet phototherapy, methotrexate, and acitretin showed that combination therapy of alefacept with low dose (10 mg, 25 mg) acitretin shortened the onset of improvement to 4-5 weeks (compared with the usual 8 weeks) and improved inverse and palmoplantar psoriasis.19 In one patient with a history of squamous cell carcinoma (SCC) who developed three SCCs every 2 weeks while on etanercept monotherapy, after acitretin 25 mg every other day was added only actinic keratoses developed during the 18 month follow-up.20

The addition of calcipotriol cream twice daily for 4 weeks, then once daily for 8 weeks, in patients with psoriasis and psoriatic arthritis who had not achieved PASI 50 at week 12 (n=45 patients) with etanercept 50 mg twice weekly, allowed 31.1% (14 patients) to become PASI 75 responders and 51.1% (23 patients) to become PASI 50 responders at week 24 despite a dose reduction in etanercept to 25 mg twice weekly at week 12.21

Narrowband UVB enhances efficacy irrespective of whether it is used from the start (12 week PASI 75 in 90% vs. 40% on etanercept 25 mg twice weekly monotherapy)22 or added after 6 weeks to patients who had not attained PASI 75 response with etanercept 50 mg twice weekly (after 6 weeks of combination therapy: mean PASI=1.6 vs. 4.7 for non-UVB treated body half, p=0.0192).

In the EASE trial, the odds ratio of a ‘clear’/’almost clear’ PGA was 2.246 (95% confidence interval (CI) 1.25, 4.0; p=0.0069) for concomitant methotrexate/etanercept when compared with etanercept monotherapy.23 In this study, 30% of patients could reduce their weekly dose of methotrexate and 16% could stop it altogether. In the EDUCATE study, 29% could discontinue methotrexate and 7% could lower their dose.24 In cases of inadequate response to methotrexate, in one study continuation of the methotrexate when etanercept was initiated resulted in greater efficacy with a similar safety profile than when the methotrexate was tapered and discontinued during the first 4 weeks (PGA ‘clear’ or ‘almost clear’ at 24 weeks in 66.7% vs. 37.0% respectively, p=0.025).25

Small case series suggest that etanercept can maintain control when cyclosporine discontinuation is needed.23,27 In a small psoriatic arthritis study, addition of cyclosporine 3.0 mg/kg/day to 11 patients whose arthritis was in remission, but who had an insufficient skin response, resulted in 9/11 achieving PASI 75 at week 24.28