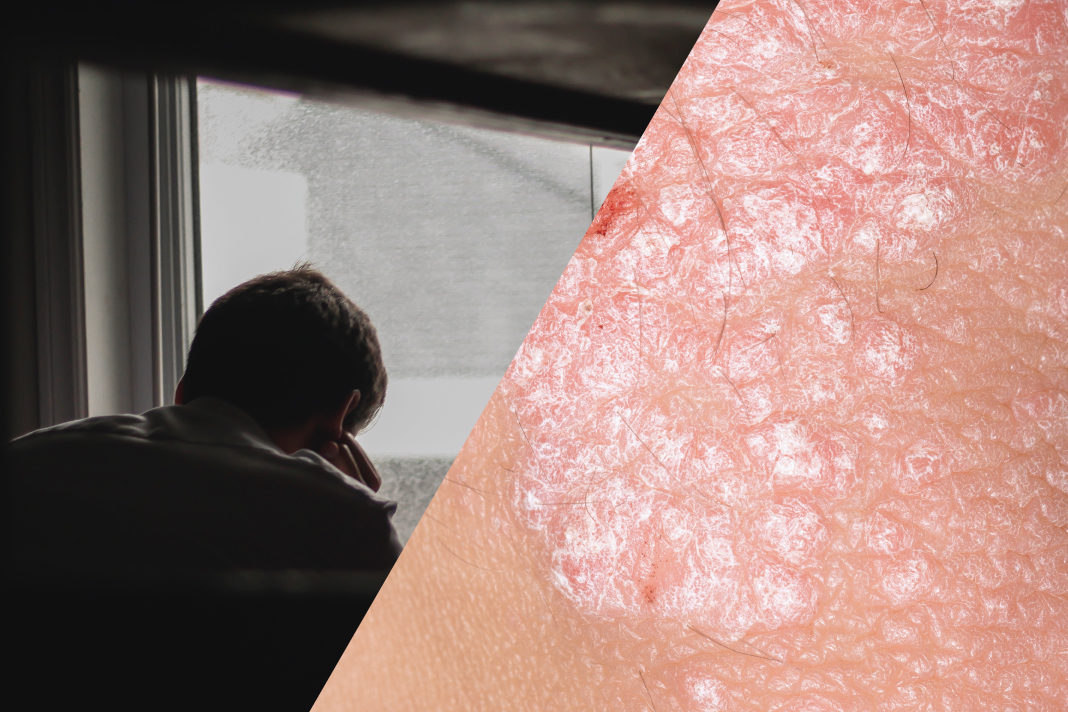 ABSTRACT
Psoriasis is a chronic condition that affects the well-being and quality of life of patients. The disease is associated with an increased risk of depression and suicidality, which may not be fully understood by the general population. It is crucial to understand the effect this disease has on mental health and determine risk factors that may help identify patients who are susceptible to depression and suicidality. Risk factors discussed in this article include age, gender, and severity of disease in psoriasis patients. Of these, age and severity of disease are significant with a clear association of increased depression and suicidality found in patients who are younger or have more severe disease. Although there is evidence that psoriasis treatments can improve both disease and associated depression symptoms, there are high rates of undertreatment. By identifying high-risk psoriasis patients, dermatologists can aim for optimal treatment of the disease and thus help alleviate the associated psychiatric burden.

Psoriasis is a chronic condition that often requires life-long treatment. It has been estimated that the disease affects approximately 1-3% of the population.1 Psoriasis predominantly affects the skin as well as joints, with an incidence of almost 3% of psoriasis patients developing psoriatic arthritis annually, and reports of up to 42% of patients with psoriasis having associated psoriatic arthritis.2,3 Additionally, the increased risk for metabolic comorbidities such as obesity, diabetes, and cardiovascular events has also been demonstrated among patients with psoriasis.4,5

Aside from the physical manifestation of symptoms, psoriasis is also linked to psychiatric disease. In a prospective cohort study looking at 50,750 female nurses in the US, those with psoriasis had an increased risk of depression compared to those without psoriasis, even when adjusted for potential confounders (relative risk [RR] 1.29 {95% confidence interval [CI] 1.10-1.52}). This RR was statistically similar when patients had both psoriasis and concomitant psoriatic arthritis (RR 1.52 [95% CI 1.06-2.19]).6 A number of other studies further support the increased risk in depression as shown by the meta-analysis and systematic review by Dowlatshahi et al. (2014).7 Although many skin conditions are associated with an increased risk of depression, psoriasis is one of few dermatological diseases that also increases suicidality risk of affected individuals. A study looking at different skin diseases across 13 European countries aimed to determine the association between various dermatological diagnoses and depression and suicidal ideation. Although psoriasis was ranked fourth highest in increased incidence of depression (odds ratio [OR] 3.02 {95% CI 1.86-4.90}), it was the only skin disease associated with an increased incidence of suicidal ideation (OR 1.94 [95% CI 1.33-2.82]).8 One study reported an incidence of suicidal ideation in the previous 2 weeks as high as 10% in patients with psoriasis.9 This level of suicidal ideation translates into a clear risk for selfharm as reported by a retrospective European study that showed an increased RR for self-harm in 1,141 patients with psoriasis (RR 1.6 [95% CI 1.5-1.7]) compared to healthy controls.10

The reasons for this widened risk are multifold, relating to both biological changes and negative effects on self-image and quality of life. Cytokines involved in the inflammatory pathways of psoriasis can also lead to depression. For example, giving patients interferon for treatment of hepatitis C can induce and exacerbate their psoriasis while also commonly cause depression as a side effect.11,12 There are additional reports of improvement in mood when certain agents, such as tumor necrosis factor (TNF) inhibitors13,14 or an interleukin-12 and 23 inhibitor15, are given to treat psoriasis. Aside from biological changes, the appearance and discomfort of psoriatic lesions negatively impact both self-image and quality of life.16,17 Patients with psoriatic lesions on noticeable areas may attempt to cover themselves with additional clothing layers, experience difficulties with sexual function, and avoid physical exercise.16 Patients report having persistent feelings of shame, worry, and frustration, which in turn affects work and hobby performance.18 The biological changes and decreased self-image and quality of life can lead to clinical diagnoses of depression, among other psychiatric disorders, as well as instances of suicidality. Although these diagnoses can be hard to predict, patients with psoriasis show increased prevalence of alexithymia, the inability to identify or describe their emotions.19 This can lead to depression and suicidality being underestimated, with many studies showing discordance between skin lesion severity and levels of distress.20-24 The distress that patients feel over their psoriasis can impair the efficacy of their treatments,25 which may lead to a vicious cycle of distress, creating suboptimal clinical outcomes that in turn create further distress. Therefore, identifying patients most at risk for depression and suicidality may help to not only treat these psychiatric disorders, but also improve overall treatment of their psoriasis.

Psoriasis has a bimodal age of onset with the first presentation occurring in patients ranging from 15-20 years and the second presentation manifesting at 55-60 years.26 In a descriptive crosssectional study of 101 psoriasis patients, those who presented with psoriasis at less than 20 years of age had an increased incidence of depression compared to patients who presented at age 20 years or older.27

Young age is also a risk factor for suicidality. A large populationbased cohort study compared 766,950 patients without psoriasis to 149,998 patients with psoriasis; young patients demonstrated a higher risk for suicidality, defined here as one or more of suicidal ideation, suicide attempts or completed suicide.28

There is substantial contradictory evidence on the effects of gender on psoriasis and psychiatric disease. One US study of randomly selected psoriasis patients used the Psoriasis Disability Index (PDI) to evaluate the effect of psoriasis on quality of life. Fifteen questions were asked regarding daily activities, leisure activities, relationships, work, and treatment, and one global question was asked regarding the effect of psoriasis on daily life. All questions were scored numerically with larger scores equating to a greater detrimental effect on quality of life. Younger patients had the highest disease burden on their quality of life, and females reported a greater PDI score than males.29 However, in another study of 6,497 Nordic patients, both genders reported similar PDI scores.30 It is worth mentioning that males had a higher Psoriasis Area and Severity Index (PASI) score, suggesting they may be less likely to report decreased quality of life, even with worse disease as evidenced by their higher PASI score.30

Multiple studies have failed to show an association between gender and depression rates in psoriatic patients. A case-control study carried out in Brazil looked at 100 patients with psoriasis and compared them to 100 healthy controls using the Beck Depression Inventory (BDI) to assess rates of depression between the two groups. The BDI is a validated set of 21 questions, each scoring in severity from 0-3 and targeting many different depression symptoms. In this study, a score of 17 or higher was deemed as possible clinical depression and the patient was referred to a psychiatrist for further confirmation. Women with psoriasis were slightly more depressed than their male counterparts as defined by the BDI, although this did not reach statistical significance.31 In a much larger study, overall there was no statistically significant difference between genders; however, in the severe psoriasis subgroup, there was a statistically significant increased rate of depression in male over female patients.28

A relationship between gender and suicidality is not well supported. In the general population, the evidence has shown that females are at higher risk for suicide attempts, but completed suicide is more common in men.32,33 This is most likely related to the use of more lethal suicide methods in males.34 In patients with psoriasis, two studies found no significant effect of patient gender on suicidal ideation or suicidality.28,35 Although suicidality is more prevalent in psoriasis patients, it does not appear to differ between males and females in this population.

Although a number of treatments exist for psoriasis, there is significant undertreatment of this disease. A study of 1,657 survey respondents identified from a random sample of the US National Psoriasis Foundation contact database showed that approximately 40% of patients with all severities of psoriasis were not receiving treatment. Additionally, 39% of patients with severe psoriasis were not receiving treatment and 35% were only being treated with topical therapies.42 Another study surveyed 391 dermatologists across North America and Europe in the Multinational Assessment of Psoriasis and Psoriatic Arthritis. Findings showed 92.1% of dermatologists agreed that the disease burden of psoriasis is largely underestimated; however, 53.5% of dermatologists stated they would treat moderate-to-severe psoriasis with topical therapies alone.43

Episodes of depression and suicide have recently become of interest when the clinical developmental program of an IL-17 receptor targeted biologic, brodalumab, was stopped due to reported cases of suicidality.45 A causal link between brodalumab treatment and increased risk of suicidal ideation has not been established, and the drug was recently granted US FDA approval with a boxed warning of an observed risk. Nonetheless, current literature strongly supports the use of biologics, including those targeting the IL-17 pathway, to improve both depression and suicidality in patients with psoriasis, and the reason for reported cases of suicidality is more likely due to the disease itself rather than any treatments used.46

The dermatology office is often a busy place and, therefore, quick and easy screening tools are necessary if we hope to add depression screening to our clinical repertoire for managing psoriatic patients. The Patient Health Questionniare-2 (PHQ-2) is a validated measure that screens for depressed mood and anhedonia over the past 2 weeks.47 It is simply the first two questions of the PHQ-9 questionnaire that includes the nine items of the Diagnostic and Statistical Manual of Mental Disorders 4th edition (DSM-IV) criteria.47 A simple algorithm for depression screening in psoriasis patients has recently been proposed by Korman et al. (2015) using the PHQ-2 as an initial screening measure.48 Increased awareness of the link between depression and psoriasis and the use of simple screening tools may improve our ability to detect this important comorbidity.

Patients with psoriasis are at increased risk for depression and suicide at rates that are not fully appreciated. Consequently, it is important to understand the impacts that psoriasis can have on quality of life, including physical and mental health. Appropriate risk-stratification may help to identify high-risk patients. These risk factors would include younger patients with severe disease presentations especially with concomitant psoriatic arthritis. Females may present with greater distress over their psoriasis than males, but both genders are at risk for depression and suicidality. Further research is needed to elucidate the mechanism by which psoriasis is linked with psychological symptoms, as well as validate screening tools for dermatologists to identify highrisk individuals. All things considered, the optimal management of psoriasis must avoid inadvertent undertreatment while understanding the potential adverse effects that the disease can have on both the physical and emotional well-being of patients.