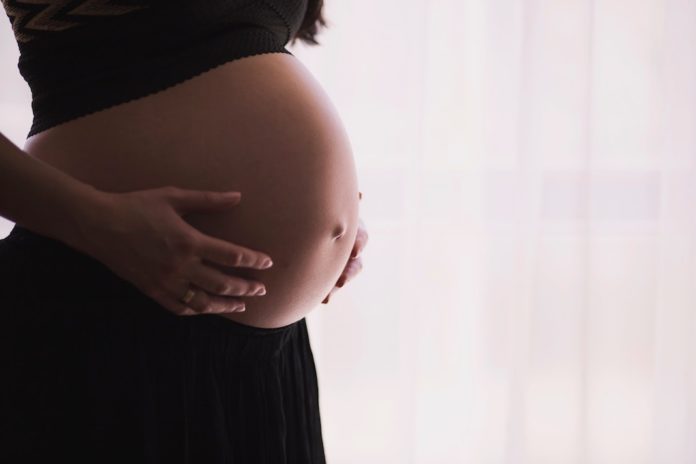 Pregnancy is characterized by multiple physiologic changes. During the entire gestational period, both mother and infant are vulnerable to a variety of external and internal factors. Maternal disease, use of certain medications, drugs, alcohol, smoking, and radiation exposure can have devastating effects on the fetus. Pregnancy-related complications in women with psoriasis can be caused by both the disease and the treatment. The response of the maternal placenta to psoriasis-induced inflammation and comorbid conditions, such as obesity, hypertension, and depression, may also influence the pregnancy. Herein, we review the relationship between psoriasis and undesirable pregnancy outcomes.

Pregnancy is a unique physiologic state characterized by an array of significant changes in the endocrine, vascular, and respiratory systems. These changes facilitate fetal growth and development and prepare the woman’s body for labor and delivery. During the first trimester of pregnancy (weeks 0-13), the developing embryo undergoes organogenesis and is especially susceptible to injury from systemic maternal diseases, medications, drugs, alcohol, and smoking. During this period many pregnant women are often unaware that they are even pregnant, and therefore do not actively minimize risks to the fetus.1 This may include women with chronic diseases, such as those with moderate to severe psoriasis, who require multiple drugs for treatment.

Psoriasis is an autoimmune inflammatory skin disease with manifestations resulting from a complex interplay between genetics and the environment. The incidence of psoriasis is bimodal, with one peak between the ages of 15-30 years and a second between 50-60 years.2,3 The average age of diagnosis in women is 28, a prime age for pregnancy.3,4 Annually, there are approximately 65,000-107,000 births to women with psoriasis, of whom 9,000-15,000 have moderate to severe disease.2

Psoriasis lesions are well-circumscribed, erythematous plaques with a fine silvery scale; they predominate on the scalp and extensor surfaces, yet can occur anywhere on the body; there may also be nail changes. The severity of the condition is determined by two major criteria: 1) the extent of body surface area (BSA) involved and 2) the location of the lesions (for example, if psoriatic plaques are present on the palms and soles, it is considered severe, regardless of percentage of BSA involvement). In general, mild psoriasis occurs when lesions are limited to < 3% BSA, moderate psoriasis with 3-10% BSA, and severe psoriasis with >10% BSA. Quality of life issues for the patient also determine severity. While mild psoriasis can typically be controlled with topical treatments, moderate to severe psoriasis may require systemic therapy.

Direct Effects of Psoriasis on Pregnancy

In general, inflammatory/autoimmune diseases such as rheumatoid arthritis, inflammatory bowel disease, systemic lupus erythematosus, and psoriasis have been shown to be associated with low birth weight (LBW), preterm birth, and abortions.5,7 Autoimmune inflammation in psoriasis results from dysfunctional T helper cells with a concomitant amplification of pro-inflammatory cytokines (most notably TNF-alpha, IL1 and IL6). Excess cytokines yield endothelial dysfunction with resulting systemic and placental vasculopathy through induction of platelet aggregation, intermittent vasospasm, and activation of the clotting system.5,8 Placental vasculopathy has been postulated to contribute to LBW infants.5 LBW is also a complication of preeclampsia, which is similarly associated with an activated inflammatory state and increased levels of the same cytokines seen in psoriasis (CRP, TNF-alpha and IL6).8-10 There is conflicting data regarding the correlation between psoriasis during pregnancy and infant birth weight.5-7 Yang et al studied 1,436 mothers with psoriasis compared to 11,704 mothers without psoriasis, and found that LBW was associated only with severe psoriasis (defined as any mother who had received photochemotherapy or systemic therapy within the 2 years prior to delivery).5 In contrast, Cohen-Barak et al analyzed 68 pregnant women, but found that mothers with moderate to severe psoriasis were more likely to give birth to large infants when compared with controls.7 This group found psoriasis to be associated with a higher risk for spontaneous and induced abortions, which is also seen in inflammatory conditions including rheumatoid arthritis and systemic lupus erythematosus.7

Indirect Effects of Psoriasis on Pregnancy

The stress associated with chronic, relapsing diseases may affect mental health, increasing the tendency for alcohol misuse, depression, weight gain, and smoking. Psoriasis is also associated with higher rates of comorbid systemic conditions including diabetes mellitus (DM), cardiovascular disease (atherosclerosis, congestive heart failure, and myocardial infarction), obesity, and metabolic syndrome (consisting of obesity, high blood sugars, high triglyceride levels, low high-density lipoprotein, and hypertension). Obesity and hypertension have been shown to be at least twice as common in patients with psoriasis.4,11 Pregnant women with psoriasis are more likely to be overweight/obese, depressed, smoke in their first trimester, and are also less likely to take prenatal vitamins or supplements.4

Both the comorbid conditions associated with psoriasis and the drugs used to treat them may be harmful to the developing fetus. Hypertension (HTN) is known to be associated with LBW secondary to placental insufficiency, perinatal mortality, and preterm delivery, in addition to increased risk for acute maternal morbidities.12 The drugs commonly used to treat HTN, such as angiotensin-converting enzyme inhibitors and angiotensin receptor blockers, can be teratogenic.13,14 DM is associated with increased neonatal mortality and multiple morbidities including, fetal macrosomia, post-natal hypoglycemia, and congenital malformations including transposition of the great vessels.15 Furthermore, pregnancy has been shown to hasten the progression of DM; healthy women may even develop diabetes only during pregnancy, which is known as gestational DM.15 Alcohol misuse may result in fetal alcohol syndrome and LBW. Maternal consequences of depression include inadequate weight gain, insufficient utilization of prenatal care, and increased substance abuse, whereas fetal consequences can include premature birth, LBW, decreased Apgar scores, and smaller head circumference.16 Obesity has been associated with macrosomia, low Apgar scores, and premature birth.4 Smoking may increase the risk for oral clefts and reduced birth weight.4

Little evidence exists to delineate the effects of psoriatic medications on human pregnancy due to ethical implications associated with investigating potentially teratogenic medications.1 General guidelines are based on retrospective data and on cases in which a woman may have used a questionable medicine without yet realizing she was pregnant. Mild psoriasis can usually be adequately treated with topical medications, while severe psoriasis may require systemic treatment. Limited amounts of topical preparations including corticosteroids, calcipotriene, coal tar, and anthralin appear to be safe. There is a low likelihood for significant systemic absorption with these topical preparations if used in conservative application patterns.1,5 The risk for potential teratogenicity increases in a dose-dependant manner as systemic absorption increases. The factors that increase systemic absorption include prolonged duration of treatment, large amounts of medication applied, a compromised epidermal barrier, and occlusion.1

Systemic medications used for psoriasis unresponsive to topical therapies include acitretin, methotrexate, mycophenolate mofetil, and biologics such as adalimumab, alefacept, etanercept, infliximab, and ustekinumab. Most of the systemic antipsoriatic therapies are associated with significant toxic effects to the fetus and should be avoided during pregnancy. Acitretin (an oral retinoid) is strictly prohibited before or during pregnancy since it can cause a classic retinoid syndrome, consisting of well-characterized craniofacial, cardiac, thymic, and CNS malformations.1 Furthermore, acitretin can linger for over 2 months after the last dose, so patients should stop this drug months before attempting to conceive.1 Methotrexate is an antimetabolite that is associated with a specific constellation of prenatal growth deformities, including growth retardation, large fontanelles, craniosynostosis, ocular hypertelorism, micrognathia, limb abnormalities, and developmental delay; these effects are dose-related. Mycophenolate mofetil interferes with DNA and RNA synthesis, and case reports indicate that it can cause microtia or anotia, cleft lip/palate and heart defects. Systemic corticosteroids are not commonly used for psoriasis; however, they remain the best available treatment for a rare condition, known as impetigo herpetiformis, a form of pustular psoriasis seen in pregnancy.17 The side-effects of systemic steroids have mostly been studied in pregnant patients with asthma and they include orofacial clefts, intrauterine growth restriction, and suppression of the hypothalamic-pituitary axis.1 There is very limited data with regard to the biologics, but infliximab has been associated with congenital malformations in two infants and death in a third due to uncontrollable intracranial and pulmonary bleeding.1,18

Phototherapy with broad-band (290-320 nm) ultraviolet B (UVB) and narrow-band UVB (311-312 nm) appear to be safe during pregnancy.1 The safety of systemic PUVA with psoralens is unknown, although mutagenic potential has been shown in rat studies; however, topical PUVA limited to small areas might be safe. Cyclosporin A in pregnant organ transplant recipients have failed to show an increased risk to the fetus1 and may therefore be an option in pregnant psoriatic patients.

Effects of Pregnancy on Psoriasis

The extent of the potential effects that psoriasis can have on pregnancy is variable. When possible, pregnant women should modify their behaviors and treatments to decrease any risk to themselves and their unborn children. Registries such as the International Psoriasis Council – project on pregnancy and psoriasis2 and the OTIS Autoimmune Diseases in Pregnancy Project4 are in the process of compiling more extensive data for this population. As data from these registries becomes more readily available, we will better understand the true implications of pregnancy on psoriasis and of psoriasis on pregnancy. Treatment plans can subsequently be developed that balance the risks from therapy versus the harmful effects of psoriasis and its associated comorbidities.