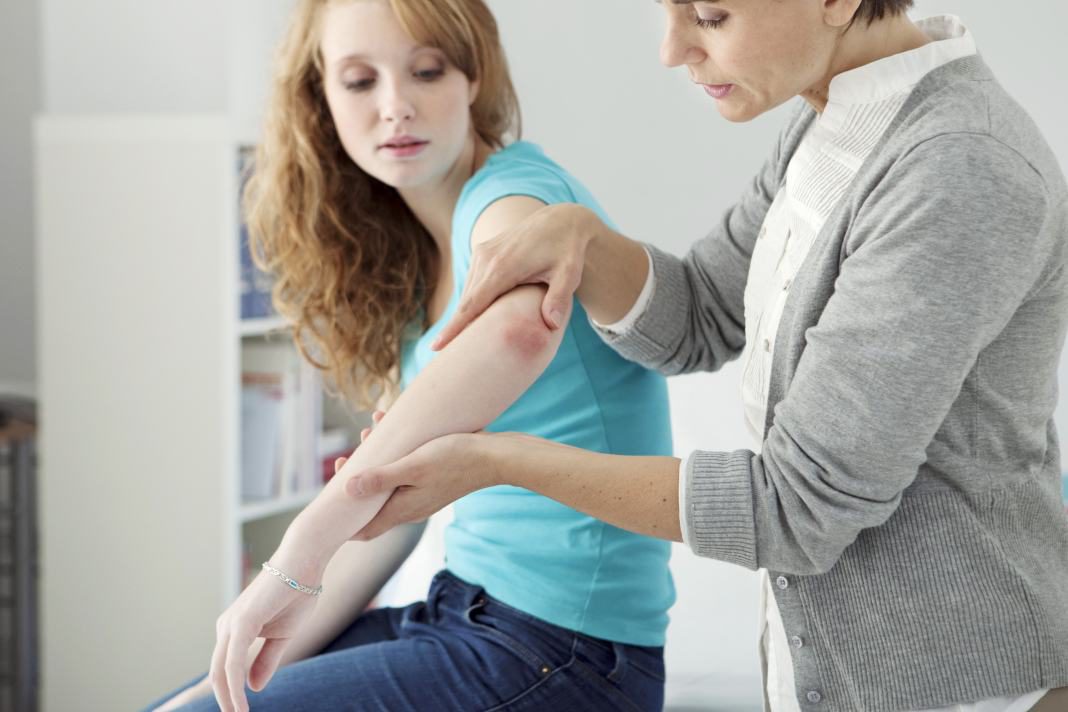 ABSTRACT
Tofacitinib is an oral immunosuppressant approved for the treatment of rheumatoid arthritis (RA) and is currently undergoing investigation (Phase III trials) for treating chronic plaque psoriasis. Tofacitinib inhibits Janus kinases (JAKs), which are essential for the signaling of multiple inflammatory pathways and have been implicated in the pathogenesis of RA and psoriasis. The efficacy and safety of tofacitinib in the treatment of RA and psoriasis have been demonstrated in Phase III trials. Across all studies, the efficacy of tofacitinib in alleviating symptoms of RA and psoriasis were superior to placebo. Moreover, treatment was generally well-tolerated, with the most frequently reported adverse events, for both RA and psoriasis, being nasopharyngitis and upper respiratory tract infection. As such, tofacitinib proves to be an effective therapeutic option for RA and a promising new therapy for psoriasis.

Tofacitinib (CP-690,550; trade name: Xeljanz®) is an oral immunosuppressant developed by Pfizer1 that is currently approved for the treatment of rheumatoid arthritis (RA)2,3 and is undergoing Phase III trials for the treatment of chronic plaque psoriasis.4-6 Tofacitinib is a pan-Janus-activated kinase (JAK) inhibitor, which works by inhibiting JAK3, JAK1, and, to a lesser extent, JAK2.7 Members of the JAK family play a key role in the signaling pathways of multiple cytokines (e.g., tumour necrosis factor [TNF]), growth factors, and hormones.2 Activation of these immune pathways involving JAKs have been implicated in the pathogenesis of RA2,8 and psoriasis.9

Since its FDA approval in 2012, tofacitinib has demonstrated promising results in Phase III clinical trials by significantly reducing RA associated symptoms such as synovial inflammation and structural joint damage.10 Moreover, ongoing Phase III studies are demonstrating that tofacitinib could emerge as a valuable therapy for psoriasis.11 The focus of this paper is to evaluate the efficacy and safety of tofacitinib in the treatment of RA and psoriasis by reviewing recent clinical trials.

Six Phase III trials (belonging to the Oral Rheumatoid Arthritis triaLs [ORAL] series) have been conducted to assess the efficacy of tofacitinib in the treatment of RA in various patient groups.12-17 A summary of the details from each Phase III trial and two long-term open extension trials18 can be found in Table 1. Three primary efficacy outcomes were similar between the five Phase III trials: 1) American College of Rheumatology (ACR) 20 ( ≥20% reduction in the number of both tender and swollen joints and ≥20% improvement in three of five other criteria: the patient’s assessment of pain, level of disability, C-reactive protein level or erythrocyte sedimentation rate, global assessment of disease by the patient, and global assessment of disease by the physician) response criteria; 2) changes from baseline in the Health Assessment Questionnaire Disability Index (HAQ-DI; range of score 0-3, “no difficulty” to “unable to do”); and 3) percentage of patients with Disease Activity Score for 28 joint counts based on erythrocyte sedimentation rate (DAS28-4 [ESR]) of less than 2.6 (range 0-9.4). The sixth trial (ORAL Start) used the primary efficacy outcome of ARC 70 response and the modified total Sharp score (mTSS) from baseline. In the groups receiving tofacitinib treatment, ARC 20 or 70 (for the ORAL Start trial) response rates and the HAQ-DI scores were significantly higher compared to the placebo groups. Most studies also showed significant changes from baseline in the DAS28-4 (ESR) score in the tofacitinib group(s) compared to placebo and the ORAL Start trials showed that the change in mTSS from baseline was significantly smaller in the tofacitinib groups. The most common adverse event (AE) throughout the studies was upper respiratory tract infection. During the first 3 months of tofacitinib therapy, significant decreases in neutrophil counts and increases in low-density lipoprotein cholesterol, and high-density lipoprotein cholesterol counts were observed compared to placebo groups. Safety and tolerability data for these studies are summarized in Table 2.

A study using pooled data from tofacitinib Phase II, Phase III and long-term extension studies was conducted to determine the rate of infection and all-cause mortality across studies in patients receiving tofacitinib monotherapy or tofacitinib in conjunction with methotrexate or other non-biologic disease-modifying antirheumatic drugs (DMARDs).19 The overall rate of serious infection in 4,789 patients was 3.09 events per 100 patientyears, with the overall rates of mortality and infection being similar in the tofacitinib groups and groups being treated with biological agents. A recent Phase II randomized control study was conducted to test the efficacy of tofacitinib monotherapy vs. placebo for the treatment of RA in Japanese patients.20 Similar to the Phase III ORAL studies, dose-dependent decreases were observed in neutrophil and platelet counts, with a significant increase in low-density lipoprotein cholesterol, high-density lipoprotein cholesterol, and total cholesterol levels compare to placebo groups.20 The significant decrease in neutrophil counts led to moderate-severe neutropenia in seven patients that was not life threatening.20 Furthermore, 23.3% of patients across all groups had a decrease in absolute lymphocyte counts, however, this did not lead to an increase in severe infections.20 Of note, RA patients from Asia may be at increased risk for herpes zoster when undergoing tofacitinib treatment. An open-label, longterm extension study of tofacitinib in Japanese patients reported herpes zoster in 19.3% of patients,21 while analysis of tofacitinib patients from the worldwide clinical program identified Asia as an enrollment center to be an independent risk factor for developing herpes zoster.22

A meta-analysis of 10 randomized controlled studies evaluating the efficacy and safety of tofacitinib in patients with active RA showed that tofacitinib, at dosages of 5 mg and 10 mg twice daily, in combination with methotrexate, was the most effective therapy for active RA and was not associated with a significant risk for withdrawal due to AEs.26

From an economic/societal perspective, studies conducted in Korea27 and Brazil28 showed that incorporating tofacitinib into the treatment regime or as a first-line therapy for patients with moderate to severe RA is a cost-effective alternative to the current standard of care.

A 12 week, Phase IIb multicenter, randomized, double-blind, parallel-group, placebo-controlled trial was conducted to evaluate the efficacy and safety of various doses of oral tofacitinib (2 mg, 5 mg, or 15 mg twice daily) in 197 patients with moderate-tosevere psoriasis.29 At week 12, Psoriasis Area and Severity Index 75 (PASI 75; the percentage of patients who have achieved a 75% or more reduction in their PASI score from baseline) responses were observed in 25% (2 mg; p<0.001), 40.8% (5 mg; p<0.0001), and 66.7% (15 mg; p<0.0001) of the patients in the tofacitinib groups compared with 2% in the placebo group. The most common AEs were upper respiratory tract infections, nasopharyngitis, and headache. Moreover, mild dose-dependent decreases in hemoglobin and neutrophil counts, and increased total cholesterol, low-density lipoprotein cholesterol, and high-density lipoprotein cholesterol occurred over the duration of treatment compared to placebo.29 In this same study cohort, outcome questionnaires were completed by the patient30 and showed that treatment with tofacitinib resulted in significant, dose-dependent improvements in several patient-reported outcomes compared with placebo. In the same study cohort, the efficacy of tofacitinib was evaluated in four body regions (head and neck, upper limbs, trunk, and lower limbs).31 Mean improvements in PASI 75 and body surface area (BSA) values were significantly improved with tofacitinib vs. placebo across all four body regions.

Data from the Phase IIb trial was also used to elucidate the correlation between pruritus (a severe and bothersome symptom of psoriasis which is not assessed by the PASI or Physician’s Global Assessment [PGA] rating of ‘clear’ or ‘almost clear’ using a 5-point scale: 0 = clear; 1 = almost clear; 2 = mild; 3 = moderate; 4 = severe)32 and the clinical signs of psoriasis (erythema, induration and scaling).33 This study showed that tofacitinib acts directly to improve patient-reported pruritus and this effect is independent from improvements in clinician-reported psoriasis severity signs.

A summary of the details for the Phase III psoriasis trials can be found in Table 3. The most common AEs were nasopharyngitis and upper respiratory tract infection. Safety and tolerability data for these studies are summarized in Table 4. Laboratory findings were similar to those reported for tofacitinib for the treatment of RA. Two additional Phase III trials are undergoing clinical investigation: NCT01163253 (OPT Extend) is in the process of recruiting participants and is a long-term open label extension study available to patients enrolled in a qualifying clinical study, while NCT01815424 has been concluded and investigated the efficacy of tofacitinib 5 mg and 10 mg in Asian patients; results have not yet been published.

A Phase III, randomized, multicenter, double-dummy, placebocontrolled trial compared the non-inferiority of tofacitinib with etanercept (50 mg) subcutaneously twice weekly or placebo (OPT Compare).6 At week 12, a greater number of patients receiving active treatment (39.5% for tofacitinib 5 mg, 63.6% for tofacitinib 10 mg, and 58.8% for etanercept) achieved PASI 75 responses compared to placebo (5.6%, p<0.0001 for all treatments vs. placebo). Moreover, a PGA response was achieved by 47.1%, 68.2%, 66.3%, and 15.0% of the patients in the tofacitinib 5 mg, 10 mg, etanercept and placebo groups (p<0.0001 for all treatments vs. placebo).

Numerous Phase II and Phase III trials have shown that tofacitinib is safe and effective in alleviating RA symptoms, relieving pain, and improving physical and mental health, either when used as monotherapy in patients who show inadequate responses to TNF inhibitors, methotrexate or DMARDs, or as combination therapy with methotrexate or DMARDs. In addition, tofacitinib has been shown to be effective in the treatment of chronic plaque psoriasis in Phase II and III clinical trials, with continuous therapy resulting in better treatment prognosis than intermittent therapy. Efficacy of tofacitinib was comparable to etanercept and superior to placebo in improving the clinical symptoms of psoriasis. Moreover, tofacitinib was also shown to improve pruritus, a common and troublesome symptom of psoriasis not typically assessed in clinical studies. These studies provide support for tofacitinib as an innovative and valuable oral systemic therapy for the treatment of RA and psoriasis.