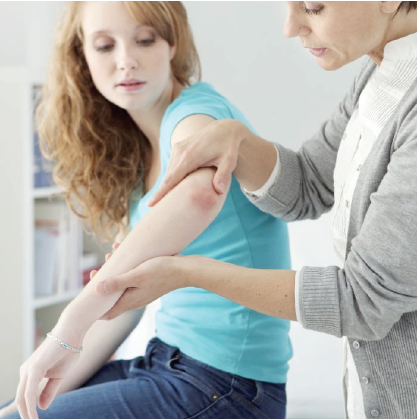 There are a number of products and treatments available to try to reverse some of the signs of sun damage. These include preparations available over the counter, prescription medications and medical procedures.

The use of products containing alpha hydroxy acids such as glycolic acid and lactic acid may have a smoothing effect on the skin. We also know that vitamin C preparations will also have modest effects on reversing the appearance of sun damage.

These products will have benefit after they have been used for many months. They peel off the dead surface of the epidermis, which allows more ultraviolet light to penetrate so sun protection is most important when these products are used. These products can be used in conjunction with prescription vitamin A preparations.

Tretinoin creams and gels have been documented as reversing sun damage, smoothing of the skin may occur within a number of weeks. There is some thickening of the epidermis as well as the dermis. The increased pigmentation may be reduced by inhibiting epidermal melanin content. If this product is used over many month or years there can be a visible reduction in the wrinkling and fine lines.

Tazarotene is the newest product shown to have advantages in reversing sun damage. It is also a retinoid or a vitamin A product that was initially used for the condition of psoriasis. It is also effective in the treatment of acne and has shown to be of significant benefit in reversing chronic sun damage or photo aging.

Chemical Peels are procedures that remove the upper parts of the skin allowing recovery and re-growth of the surface. This relies on initially wounding the skin which stimulates growth of fresher, newer looking skin. The peels can either be superficial or quite deep into the dermis. Superficial peels include glycolic acid preparations.

The deeper peels such as trichloroacetic acid and phenol are used less often. These produce more benefit but also carry an increased risk of pigmentary changes or possibly very superficial scarring. Recovery is quicker with the more superficial peels and may take weeks with the deeper procedures. The peels treat fine lines, age spots and uneven pigmentation.

The use of dermabrasion has diminished. This was performed by mechanically peeling off the skin surface with a metallic rotating instrument and then supporting the skin as it healed.

Laser brasion has been used over the last decade with quite significant results. The laser essentially vaporizes the skin away in very thin layers. The CO2 laser was first used and later the Erbium Yag laser became more popular as it produced less heat damage to the skin, which meant a more superficial layer of damage and a faster recovery.

The disadvantage of these procedures which essentially peel the surface of the skin allowing renewed growth of skin, which has less of a photo-damaged appearance, is the lengthy healing time. There is considerable redness for the first 10 days that usually requires time off work. The risk of prolonged redness and some whitening of the skin are also observed in some.

Non-Ablative Laser Surgery is a new development in the treatment of photo damage. These procedures involve the use of a broad-spectrum intense pulse light or laser, which is used repeatedly on the skin. This heats the dermis and encourages collagen production. It can also minimize some of the redness from broken blood vessels and diminish the hyper-pigmentation, which may be a consequence of photodamage.

Pulse Dye lasers that are used for red birthmarks or rosacea also have a benefit in photo damage in that they heat the skin, encouraging production of collagen with subsequent smoothing of the skin. These lasers also reduce the red vessels that often can be of cosmetic concern.

Skin fillers can be used for individuals with deep lines and wrinkles. These include collagen or hyaluronic acid. These are useful for lines that are seen in the resting phase. These have gained popularity. Collagen purified from the skin of cows is injected into skin wrinkles to fill in the depression. The benefit lasts for 3-6 months.It is usually used for correcting the naso-labial folds or deep smile lines or crows feet.

The treatment is usually well tolerated but there is usually some stinging or burning. Slight swelling and redness may be transient after treatment. It is essential that a small quantity of collagen be injected into a test area of skin weeks before the treatment to ensure that there is no allergy to the product.

Artecoll is collagen which has been impregnated with minute spheres of methylmethacrylate. This gives a long lasting effect to the injection. It appears that the injected collagen dissolves allowing the skins own collagen to grow on to these tiny beads. It is used for deeper lines, acne scars, smile lines as well as for enhancing lip fullness.

Hylaform and Restylane are injectable gels of Hyaluronic acid. This is part of the ground substance or material that collagen lies in within the dermis. Its production is diminished with age allowing the skin to wrinkle. These are introduced into the skin to fill in the defect that allows the wrinkling to occur. Allergy is not a concern with these. There may be some redness and swelling after the treatment but persistent redness is rare.

Individuals with wrinkling in the glabella and on the forehead can benefit from this also. This is done by inactivating the muscles under the skin that produce lines and wrinkles. These are not the types of wrinkles that are the result of sundamage. There is no change the quality of sun-damaged skin.

Wart Treatment by Type of Drug and Procedure

Wart Treatment by Type of Wart